It seems only fitting that we compare the 64GB SSDNow V+ against the new improved 40GB SSDNow. These are the two smallest SSDs we have on hand for the closest comparison. The objective here is to test the purpose of the 40GB SSD which is to provide faster Boot Times and see if it really does boot…faster.

I already had the Intel DP55KG test system assembled, so that saves some time. Here’s the break down of the test system:

Since, neither of these drives are really intended for any kind of database access which favours small file performance, the testing was kept fairly simple in this respect. The SSDs were loaded down with Windows Vista 64-bit as well as a massive 20GB bloated file. Crystal Disk Benchmark, Quick Bench, and a literal Boot Time test were performed. Let’s go!

QuickBench is a easy to use favorite of mine. It benchmarks drive performance testing the various 4K to 1024KByte transfer rates. It even benchmarks large 20-100MB file transfer rates blending it all together. This should give us an ideal of smaller file size transfers. 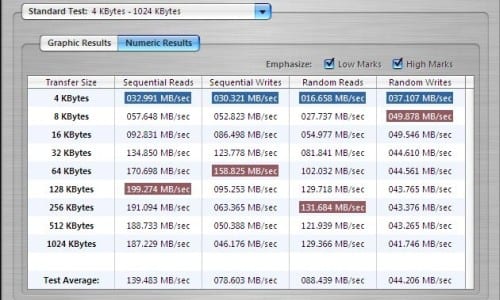 The first screenshot here is the Boot Drive 40GB SSD’s results. Sequential rates are naturally pretty fast even with the smaller 4K, 8K, and 16K data blocks as it should be given that it has the heart of an Intel SSD. It’s the Random rates that will leave any and every platter drive in the dust which score less than half this. 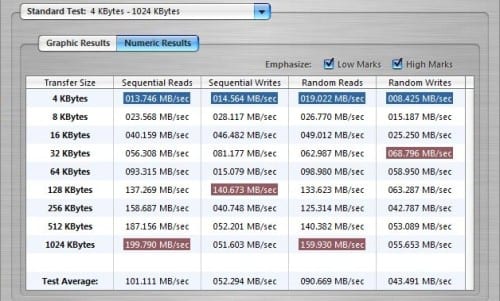 Just above, you can see what the comparable V-Series+ 64GB SSD does with its Samsung based controller. Um, yes, I see it too! It’s noticeably slower in the Sequential rates but, very comparable in Random rates. I suspect the Samsung controller is having a harder time moving around data being that the drive is loaded down with files. 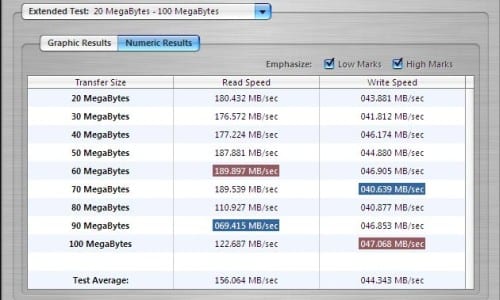 Starting off with the 40GB SSD, we can see the Read rate is a little short of spec, while the Write rate exceeds it by 4.34 MB/s. It is at least faster than the data block results. 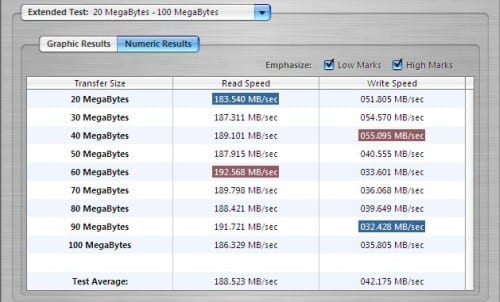 We finish off these tests with a look at the V+ Series 64GB SSD. There’s a definite change in the Read rates. This time it beats the 40GB SSD by about 32.4 MB/s. So, it appears there’s a little trade off when dealing with larger files. 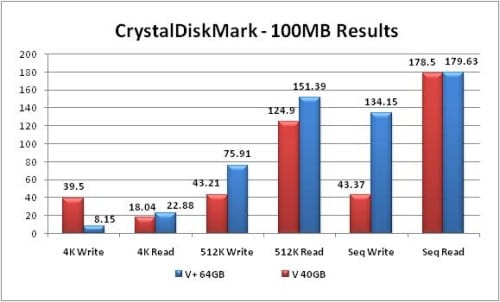 The results here a interesting. You can see that the Sequential Read matches the V+ Series 64GB. But, it’s in fact slower on the the Seq Write performance. That may seem like a kick in the pants, but this benchmark indicates that the 40GB is operating just above spec and it gets better.

Check out the 4K Write score. The 40GB just repeatedly destroys the other drive by about 31.5 MB/s. That’s also more than double the Write performance of my treasured Patriot Memory 128GB TorqX SSD. It’s obvious that the 40GB is primarily tuned for small block performance.