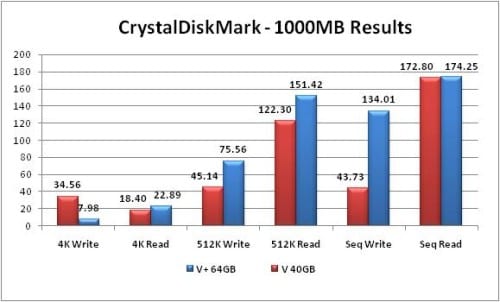 Repeating the 5 test cycle, the 40GB handles the larger files with very similar results. Again, the drive operates to spec in Sequential performance. It follows up with a 1-2 combination punch with the 4K Write performance. Again, the 40GB is tuned to handle 4KByte data most likely because our systems use them most.

This should be pretty easy to figure out. First, just the time it took from the Splash Screen to the OS was recorded. Then, four Office programs were added to the Startup process and again recorded. The results were rounded off to the nearest second. 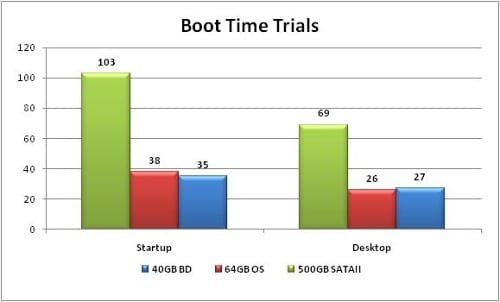 The two systems traded spots loading just to the desktop. There’s not a whole lot going on for just this. It was a little surprising to see the the 40GB do a quicker job of booting to the desktop along with loading up the four Office based programs. It really makes use of 4KB data blocks which make up the bulk of PC data. Do we really need to comment on the SATA drive thrown in for comparison?

Before you go kicking your platter drives out the window, it’s obvious that the purpose of the Kingston SSDNow V Series 40GB solid state drive isn’t to replace your current platter drive entirely. In fact, its purpose is only intended to take over Operating System operations and even compliment your current platter drive. In Bootable terms, it will give your system many of the benefits as if you were running it all based on an SSD. 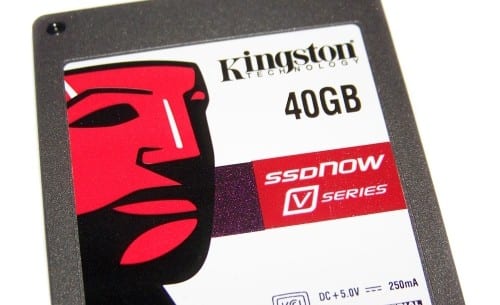 Overall, the performance is very similar to the V+ Series SSD which uses a Samsung controller. While I’m not sure yet what’s in the 40GB exactly (we think it’s INTEL), the controller used can at least produce some fast rates and even surpass the V+ in some cases. It has the performance and it has the Kingston name backing it. Plus, it’s an Intel SSD deep down inside, though you wouldn’t know given the labeling.

At present, the SSD does not offer TRIM support. However, we did hear from Kingston that users can expect something in the future. Plus, Intel based SSDs are a bit more resilient at self-monitoring than many others. You’ll just have to do a quick DIY firmware update. Till then, you more than likely won’t have to worry about any spring cleaning as long as it’s used as a “Boot Drive.”

In the meantime, keep your eye on Newegg. On November 9th, you’ll be able to find this little gem for $84.99 after rebates; just in time for the holiday season. Personally, I think these would come in very handy for those in the tech field. For a fraction of the larger capacity SSD prices, you can give your system or PC guru the gift of performance.