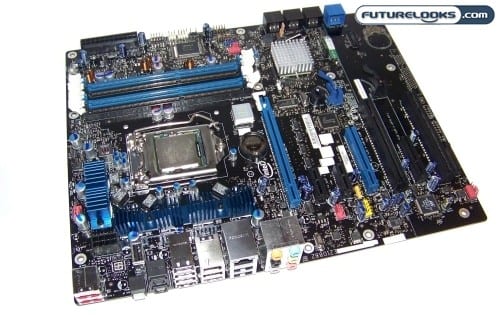 There are a couple odd things we’d like to point out. The first is that the Boot LED is located just between the CPU socket and primary PCIE slot. The issue here is that it will undoubtedly be blocked by large CPU coolers and video cards. There is also a vertical USB port between the CPU socket and I/O ports on the back. Perhaps it’s there for descrete bootable USB flash drives.

At the bottom of the board, you can see a SATA input power port. Normally, you’d see a 4-pin Molex port to help provide auxilliary power to the graphics slots. Intel engineers opted to use a SATA power connector instead. This is pretty cool since you often have plenty of SATA cables left over on the PSU. Pretty slick thinking here.

Alright, we’ve covered the specs, shown you the board, and listed the important points that need testing. Let’s, cover the test system first.

The only board in our possession that matches the DP55KG similarly in specs, expansion, and price is the GIGABYTE GA-P55-UD5. There are a few others on hand, but they don’t offer the same features comparison.

As with what I’ve come to expect with any Intel motherboard, installation was superbly uneventful. The XMP memory settings worked fine on any random modules used. Even the Back to BIOS button worked like a charm during testing. It really is nice not having to mess with any internal switches, buttons, or jumpers.

Here’s the spiel on what we’ll be testing with today:

Of course, Windows Vista is still our operating system of choice till we get around to a mandatory changeover of all of our test systems here over at Futurelooks.

As far as benchmarks go, in order to answer the questions needed for you to make an educated decision on whether this is the board for you, we continued testing with SiSOFT SANDRA, Cinebench R10, PCMark Vantage, 3DMark Vantage, Crysis, and RightMark Audio. Let’s get to work! 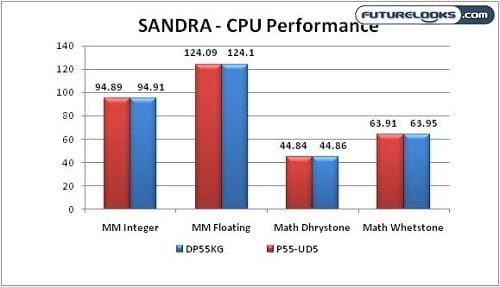 It’s a flip-flop in favor of both boards here under SANDRA’s big arm. Neither platform is able to out do the other by any great margin. What matters here is that the DP55KG offers an equally strong arm in handling the test. 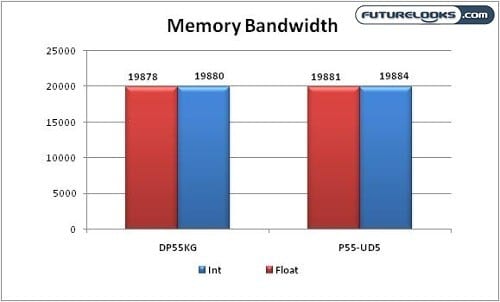 Ah, the one thing that continues to bend program after program to the will of Intel: Memory Bandwidth. The integrated memory controllers inside the Lynnfield offers excellent peformance to any system. The two champions here make great use of Dominator memory and flex that potential offering about 19.8 GB/s. Again, any differences in performance are statistically insignificant. 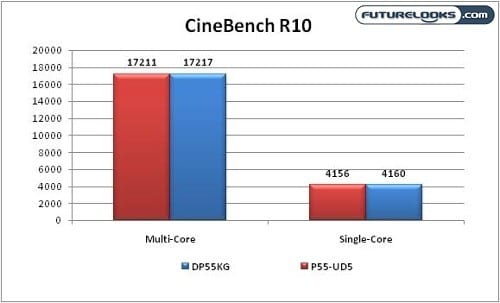 Cinebench’s heavy rendering test seems to favor the DP55KG on the average. Not by much mind you, but just enough to respect it as a fully capable platform and still a leader in its own right.