We recently chose to use the MSI Z77A-GD65 to test Sandy Bridge compatibility. Just t0 recap, the board was equally up to the task of handling a 48 hour burn test, showing us a bit more efficiency running Sandy Bridge than the previous P67 and overclocking our Core i7-2600K to 4.9GHz without over-extreme voltage. I’m reusing the same system to test Ivy Bridge. We do have a pile of Z77 motherboards to present to you in the next couple weeks so you can pick out your own platform from a competitive bunch. Stay tuned for that.

Here’s the breakdown of the test system with all the previous trimmings except for the swapped out Ivy Bridge Core i7-3770K processor.

We wanted to include dual NVIDIA GTX 680 PCIE 3.0 graphics cards, but due lack of supply, we weren’t able to get our hands on a couple of Kepler reference cards. In fact, all our favorite retailers and/or partners are still out of stock. Since we need to verify dual graphics performance is working properly, I’m happily stuck using two of my favorite MSI video cards based on the GTX 560 Ti GPU.

The average overclock on P67 and Z68 motherboards was 4.8GHz. The highest overclock we ever achieved was 5-5.2GHz using an ASUS Maximus IV Extreme using up to about 1.5 volts. I tried using similar efforts to push Ivy  Bridge higher using various Z77 boards but 4.9GHz seems to be on the hairy edge of unstable. The comment I’ve heard regularly is that Ivy Bridge doesn’t quite reach the same overclocked frequencies in this revision due to focus on inter-core/gate efficiencies than voltage regulation and frequency. It’s possible that a new stepping or future revision may do even better though a solid 4.8GHz is nothing to scoff at. 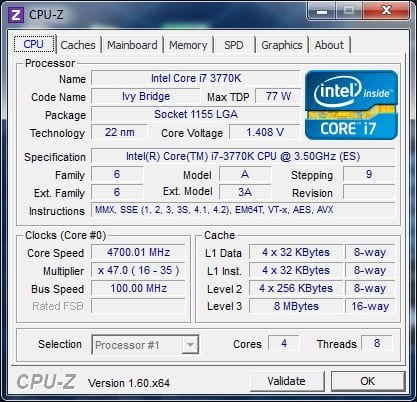 Ivy Bridge runs about as cool at stock and turbo frequencies as Sandy Bridge. The chip averaged 50C when beating up the cores under the HAVIK 140 CPU cooler. During gaming, the CPU temps were as low as 43C depending on the game title and how many cores it utilizes.

Something I wasn’t expecting was that the Z77 boards ran noticeably cooler than the P67 and slightly cooler than Z68 platforms in the past. Heat sinks do help play a tiny roll in cooling but it’s honestly a pretty small part since there’s usually a piece of thermal tape between the component and heat sink. Unfortunately, the temps are truly ambiguous at best as it comes down to the quality of components used and how much voltage engineers tuned to flow through them.

First thing to keep in mind is that these scores were achieved using the Intel DZ77GA-70K Extreme motherboard. Performance will definitely vary across various motherboards due to characteristics like BIOS, chipset tuning, voltage regulation, turbo transient responses and peripherals. Here’s the benchmark break down list.

The DZ77GA-70K subsystem IO, audio, quality and power consumption will be scrutinized in our Z77 round up along with the rest of the group. We’ve been looking over every aspect of the boards right down to the BIOS so expect more detail in these upcoming reviews. 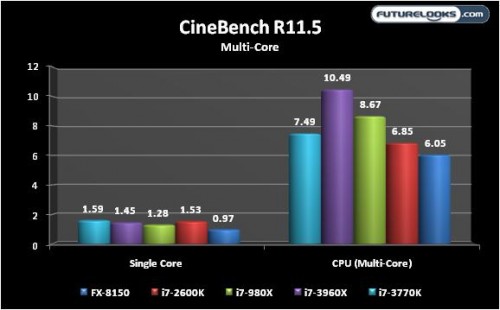 Speaking of rendering, Ivy Bridge shows us how those core improvements increased performance. It actually catches up to the previous processors in single core performance. Why? It’s all about the Intel Turbo that ramps up quicker on the quad cores. While multicore performance has improved over Sandy Bridge, it doesn’t catch up to the hex cores. 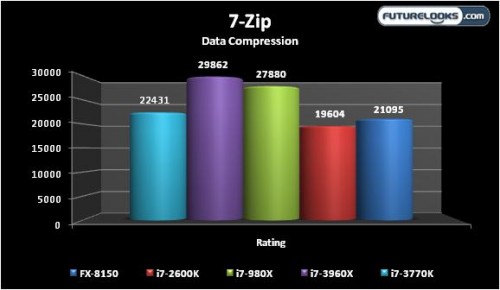 Raw core muscle makes the difference in this benchmark. Even the AMD FX-8150 flexes some muscle. Ivy Bridge steps up and puts the Bulldozer back in perspective. With four more Hyper Threads, Ivy Bridge would easily catch Sandy Bridge-E. If AMD’s focus had more focus, it would be a different story I’m sure.