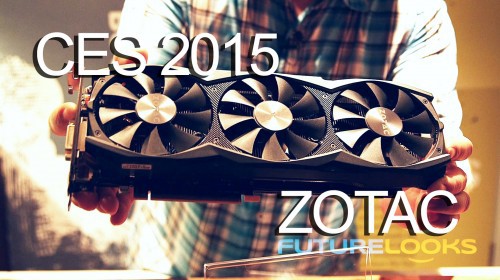 After visiting them at COMPUTEX 2014, much has changed at ZOTAC. From those changes come a newly reinvigorated ZOTAC that is now more willing to push the limit with their products. At CES 2015 in Las Vegas, the company shows off a range of products that show their commitment to both discrete graphics cards, and their ZBOX mini PC systems. Check out the video below for our video coverage from their suite at the show…

For those that want to skip around, check out the time codes below. If you have any problems watching the video, you can also view it on our YouTube Channel. (originally posted on Jan 9, 2015)

00:59 – The GTX 970 AMP! Extreme Core Edition is a much slimmer version of the original OMEGA Extreme edition, that fits into the space of two slots, instead of 2.5 slots. It does this by shedding some weight, and dropping a bunch of overclocking features, in exchange for higher clocks out of the box. They even shaved the price down to $389 US.

01:44 – The GTX 970 AMP! OMEGA Core Edition is a slimmed down version of the original OMEGA edition, fitting into 2 slots comfortably. It also gets a higher overclock out of the box, and also trims the price tag down to $359 US.

02:35 – ZOTAC also launched their next generation of PICO ZBOXs. They’ll have an Intel based one for that is spec’d to work better for multi-tasking environments, and they’ll even have a an AMD version with better graphics, in case that is a priority. They’ll both be hitting the sub $250 US price point, with pricing still to be confirmed.

04:08 – ZOTAC also updates their flagship ZBOX of last year, the EN760, with updated graphics and performance. The new EN860 now has a GTX 860M onboard, and will be available in a barebones version, or a version with a 1TB 5400RPM drive and 8GB of memory onboard called the PLUS. The barebones will start at $549 US.

You can find more CES 2015 coverage right here. Photos from our visit are posted below.