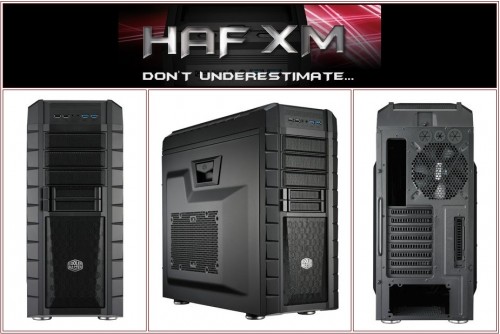 Coolermaster has been busy pleasing gamers this past year with a plethora of products. This included the new Sirus True 5.1 Gaming Headset, QuickFire QuickFire Rapid Mechanical Keyboard, Storm Trigger Mechanical keyboards and more. Now they’ve put the finishing touches on a new product which came about from finely tuning and modifying a previous award winning enclosure. That new case is called the Coolermaster HAF XM mid-tower.

Since Coolermaster excels at making enclosures for the enthusiasts, it was only a matter of time before we saw a mid-tower version of the NVIDIA certified full tower HAF X. Originally seen at CES 2012 this year, it’s much like the HAF X minus a couple 5.25″ bays. It’s also designed for standard ATX sized motherboards as opposed to larger XL-ATX ones like the original HAF X and there are some updates that give it great cooling potential but still accommodates those new massive new graphics cards. Let’s see how it does!

Let’s check out the specs of the HAF XM and compare them to the X. Keep in mind the XM is a smaller mid-tower which means cutting back on a few slots, fans and chassis space compared to the full tower X. 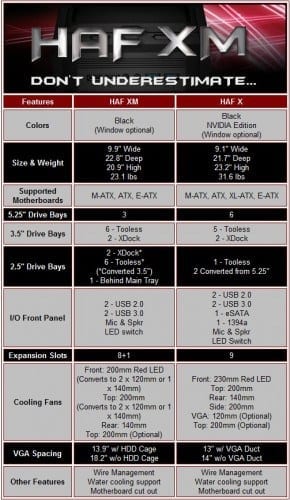 Despite the smaller chassis, the HAF XM still offers very similar features. Some things worth noting are that the HAF XM has more tooless hard drive trays and still offers handy hot swap X-Dock bays. The HAF XM is designed to support 3-way NVIDIA SLI/AMD CrossFireX cards. However, like many cases with enough slots, it may also accommodate a 4th video card as long as your motherboard has the proper layout.

At launch, the CoolerMaster HAF XM will hit the streets for $129.99 US, which puts it into the same territory as the recently reviewed Antec Eleven Hundred gaming chassis as well as other new gaming cases in this highly competitive price point. 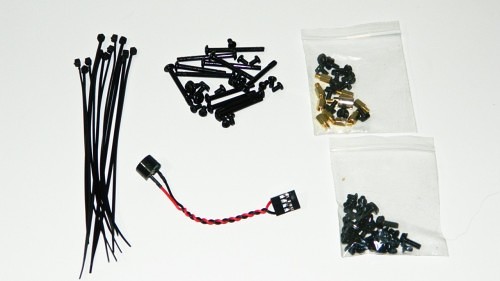 The case comes with a normal array of standoffs, screws and a mini speaker. It comes with some extra zip ties that help keep cables wrapped up. Also included in the accessories are special longer screws for mounting more fans similar to the one on top of the case. These potentially will also work if you needs screws to mount a radiator or mount the fans to the radiator. Modders can definitely use these longer screws for those tough to attach components. 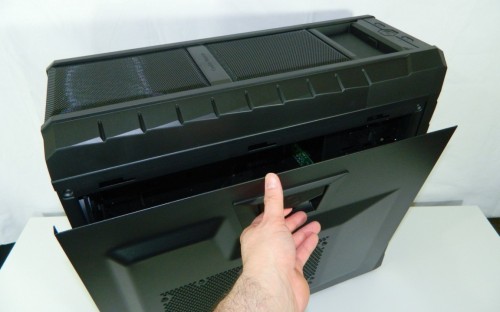 Right away, the HAF XM had me wondering just how that side panel handle worked. Pulling on it disengaged the slots that lock the panel in place and it tilted outward. This is very cool. The left side doesn’t have one. While, not the end of the world, the cable management feature makes accessing the left side more common these days. Perhaps it’s something CM can think about in a version two. But for the most part, being able to access left side once you’ve properly tucked everything away, isn’t that important.

The right panel supports either one 200mm fan or two 140mm fans. It’s unfortunate that the no fans comes preinstalled on the panel since at least one would help keep video cards cool. Once you do install fan(s), the side panel is molded outward so that it doesn’t conflict with any components inside. This can be an issue when you have a full load of GPUs in SLI or CrossFire. 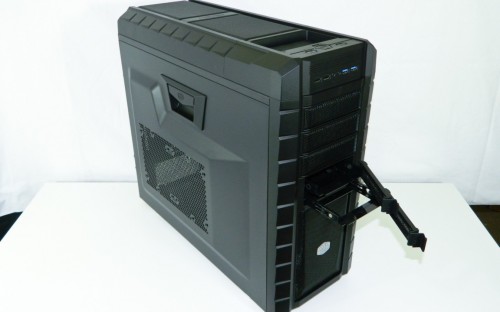 The front is pretty similar to the original HAF X facade right down to the mesh. One front 200 red LED fan can just be seen through the bottom mesh. The two small 3.5″ slots are actually removable 2.5″ SSD drive trays that interface with the X-Dock hot swap mechanism inside. These can be used for removable or permanent storage. The control panel at the top front of the case houses the USB 2.0, USB 3.0 and audio analog access ports. 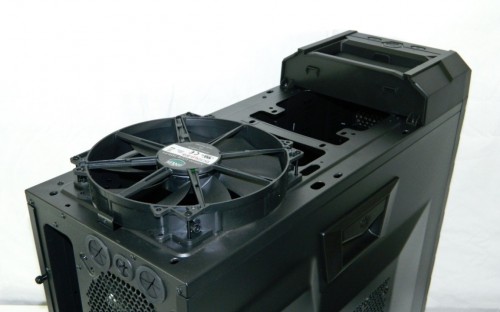 Near the front panel controls, there’s a small accessory tray with a removable rubber tray right. Perfect for keys or your smartphone. The rest looks uneventful till you remove a single thumb screw in the back which allows the sturdy top to be removed revealing a 200mm cooling fan. Users can easily keep their fans and vents clean. Also, there’s just enough space for a dual 120mm radiator configuration should you choose to install one.