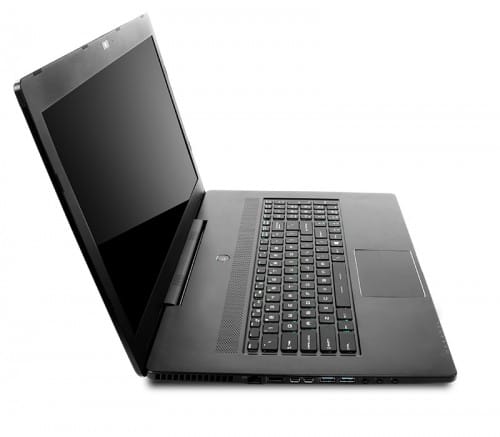 I personally have never been a fan of portable gaming devices such as the Sony PSP, Gameboy and Nintendo DS. And it’s because they only do one thing very well and nothing else at all really. However, the last few generations of portable gaming systems added a lot of PC features with various levels of success. But the best way to marry portable gaming and PC features is to make one portable. And that’s what the new iBUYPOWER Battalion Ultra-Thin gaming laptops is all about. But thinner.

The Battalion series encompasses same great quality from iBUYPOWER’s previous products, but in a package that is less than one inch when closed. When open you get use of the Intel i7-4700HQ, Nvidia GTC 765 2GB, 8 GB of 1600 MHz RAM, Killer network connection hardware, illuminated keyboard and 17.3 inch screen to crush your competition online. No it doesn’t fit in my pocket, but neither does medication for eye strain (or eye drops for the many side effects of said medicine).

The Ultra-Thin Battalion M1771 and Battalion M1771-2 are identical with the latter having the addition of a 256 GB SSD. They are priced at $1429 US and $1769 US respectively. This puts them in very competitive territory with the similarly thin MSI GS70 which starts at $1799 US. Even so, it is a pricey toy, but the best toys always are. Check out the full press release below.

Sept. 18, 2013 – Is it possible to gain something when one removes something? iBUYPOWER is proud to announce our ultra thin gaming laptop, the 17-inch Battalion Ultra-thin — where all excesses were trimmed, leaving only absolute performance.

Created from the ever increasing need to be mobile and be nimble, the new Battalion Ultra-thin sports everything a relentless gamer could want: a theatrical 17.3-inch Full HD 1920 x 1080 screen, NVIDIA GeForce GTX 700-series graphics, the latest Intel Core-i7 processors, and excellent battery life. And while all that’s on the inside of the new Battalion hails to performance junkies, it’s what’s on the outside that shows “less is more” is a great thing. Built around strong yet striking dark aluminum, the new Battalion is the thinnest 17-inch gaming laptop.

“It used to be that the biggest notebooks carried the biggest power, but that’s not the case anymore,” remarked Darren Su, Vice President of iBUYPOWER. “Our new Battalion demonstrates that you don’t have to sacrifice on mobility if you desire incredible gaming power. For those who want the best of both worlds, this is it.”

The new iBUYPOWER Ultra-thin laptops can be purchased here: http://www.ibuypower.com/Info/Battalion-Ultrathin.aspx