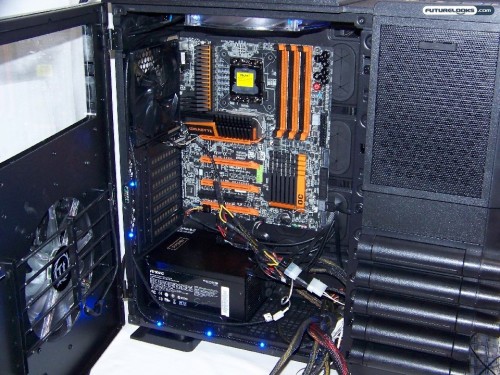 The primary goal here is to see how well the board overclocks since that’s its sole purpose of being. We’ll be using a few software and gaming benchmarks commonly used that show tangible performance results. A couple have no purpose, but are used within the gaming and overclocking communities for bragging rights. That means we’ll be using Cinebench R11.5, 3DMark11, PiFast, and SuperPi.

I started off overclocking the system using just the Auto VCore CPU voltage setting to see how it manages itself. The top stable OC was 4.5GHz. That’s pretty decent given that most boards are tuned a little more conservatively when using hex cores. The UD5 starts choking at 4.3GHz. Each boards’ results were identical regardless of using air and water cooling. 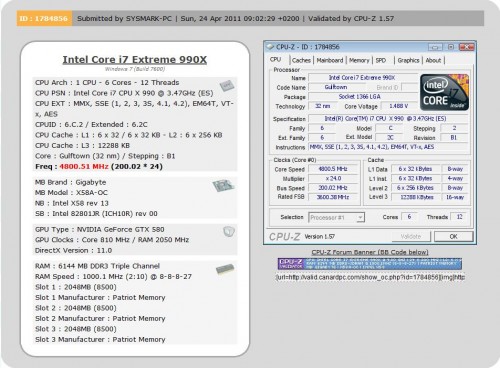 Next, I applied a solid 1.5 volts VCore with the least amount of voltage droop and a slight PLL/VTT increase. The result was 4.8GHz on the X58A-OC and 4.6GHz with the UD5. Again, the results were the same regardless of the cooling method. This tells us the OC board is definitely better tuned for frequency scaling. Of course, each board could take the CPU a little farther in some benchmarks, but neither were quite 3DMark11 stable using this locked voltage.

Something to keep in mind is that plenty of OC fanatics don’t care if it’s completely 100% stable and often go looking for the hairy edge SuperPi and/or CPUZ validation results just for bragging rights. The board was able to hit 4.9GHz, but it wasn’t able to finish benchmarks. I believe my 990X ES could be the weak link. Still, the OC board could very well have the most logical BIOS settings meant for doing nothing other than overclocking. 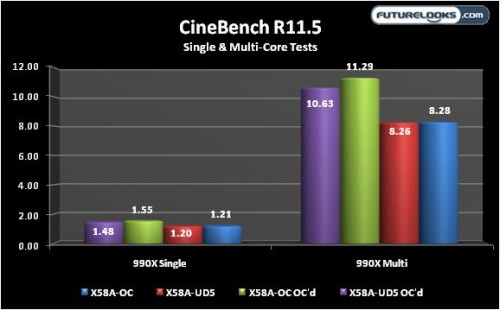 Since this is an all CPU intensive benchmark, the overclock result is pretty clear. If you’re willing to feed your CPU more than 1.5 volts, you’ll reach near 12 on the multicore test. On LN2, you’ll make our score look silly, but may also be looking for a new board after if you do the single use “hero run”. 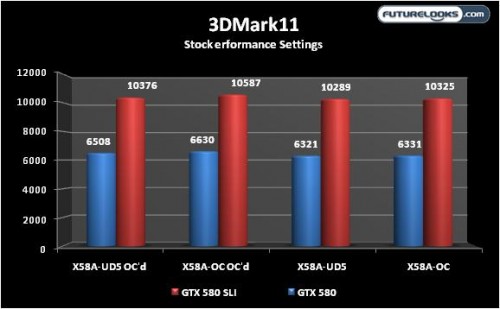 The OC’s ability to overclock higher helps the system move faster and faster down the 3D pipeline as the CPU frequency goes up. The increase is pretty noticeable in the results. Again, on LN2 or Phase Change cooling, you’ll push some much higher scores.

While not a very popular benchmark among reviers, SuperPi is however popular amongst the overclocking community. It’s a simple calculation that utilizes a huge bulk of the CPU’s performance. The lower the times, the better the score. 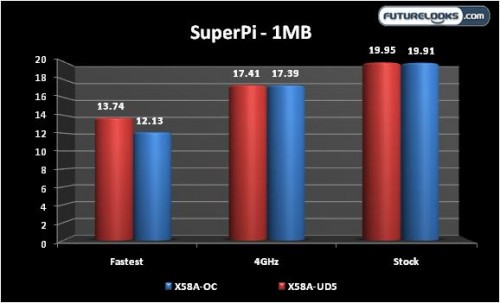 Naturally, it’s expected to see the times drop as more and more frequency is forced out of the CPU. While we’re looking for the fastest time from overclocking the CPU, the score can heavily be influenced by memory frequencies as well. This score was achieved with 2000MHz DDR3 at CAS 8 timings.