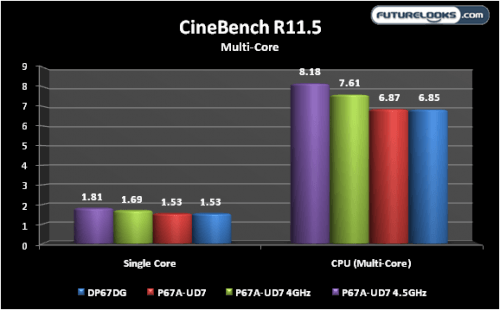 At stock speed, the GA-P67A-UD7 doesn’t score much higher than the INTEL DP67DG at all. When overclocking, the UD7 out paces the BG by a bit resulting in an 8.81 in the multi-core test. Compared to a stock Core i7-980X’s score of 6.85 that’s pretty nice.

This demo is more 3D intensive than a great deal of the many video games currently available. It’s very good for thoroughly testing DX10 and DX11 graphics as well as your system’s overall performance. 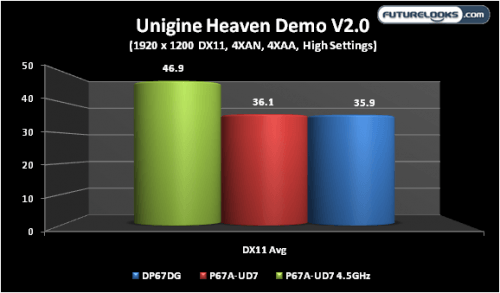 Again, we see the UD7 remain ahead by just a small bit producing a healthy 3D and system score. Applying the overclocked frequencies gives the system more teeth to score even higher and perform better.

We have to make sure the system supports all the storage interfaces it claims? What good is a USB 3.0 motherboard if it can’t support the device? (Rhetorical question.) 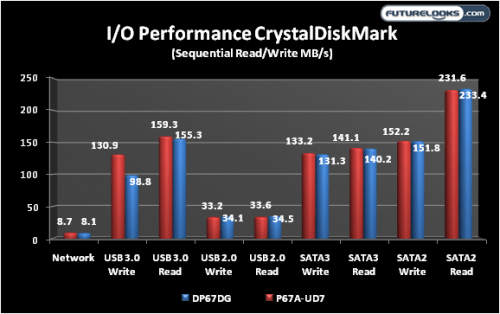 It’s very similar transfer rates between both platforms. But, for some reason (probably driver related), the write speed of the USB 3.0 is a slower on the Barrage (DP67DG). Now, things are very similar and less impressive when testing SATAIII (aka SATA6) through the Marvell controllers.

As noted at the very beginning of our review, we noted the issues INTEL has had with the Sandy Bridge chipset. However, we experienced no SATAII performance issues when testing and pushing our P67 test platforms today. We will keep an eye on this as time goes on.

How a vendor implements, or integrates their choice of audio codec (processor) directly effects the quality of audio you’ll hear through your speakers or headphones. Here, we’re measuring and listening to the 24-bit 48Hz and 192Hz audio quality.

First, let’s recap the testing results from our sample Intel DP67DG Barrage Extreme Edition motherboard. Here was the average result from that platform’s audio tests which include 48Hz, 96Hz, and 192Hz testing. Below, we have the UD7’s results.

It’s evident that GIGABYTE has stepped up to correct sporadic P55A audio issues. It’s the 48Hz performance that scored one little poor mark in THD+Noise. However, the higher quality settings more than made up for it even more so at 192Hz. The nice thing here is that there is no squeaking, squelching, or odd popping when you listen closely. You can expect more voluminous audio at higher levels whether it be music or games. Clean audio is good!