What we’re doing here is looking for any board noise caused by poor component quality or implementation. I was also looking for areas or components where the board might be over heating. It’s important to system integrators and users alike that this is well managed as it can effect the life span of the platform. With that said, here’s what I noticed. 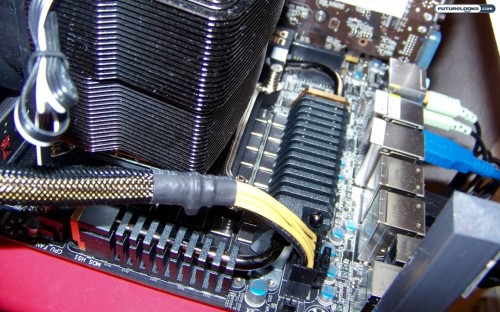 There is an ever so slightly audible high pitched sound resonating from the motherboard’s components surrounding the CPU socket when doing something intensive like running Sysmark. During gaming or media activities, the sound is less audible. Keep in mind that a worthy computer enclosure can help hide the noise.

There were no notable thermal issues when using my my trusty laser thermometer to measure surrounding chokes, Mosfets, heat sinks, VRM components, and the PCB. The average idle component temp was 29C and topped out at 40C during the highest work loads. Even when highly overclocked, the system approached 45C which is roughly 115F. Overall, this is pretty decent.

A Seasonic Power Angel was plugged in to the wall socket while measuring both test systems. System idle and load measurements were recorded. 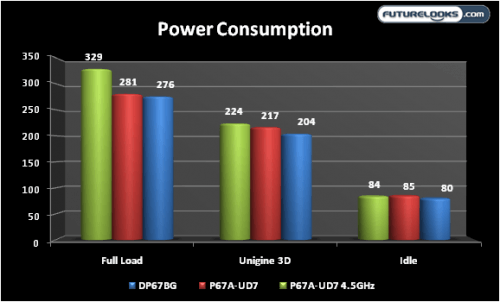 This time around, I wasn’t surprised to see the UD7 consume more power than the Barrage. The UD7 offers more PCIE and component features which naturally means more power is needed. And, yes, as you go SLI or Crossfire with your UD7, it will continue to consume even more power. But, that’s the price of being an enthusiast. 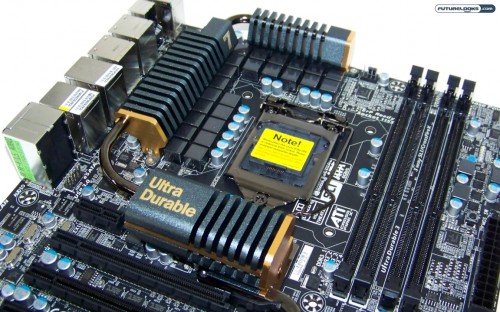 One of the things that impresses me most about the GIGABYTE P67A-UD7 over the previous generation platforms is the seemingly more aggressive BIOS and quicker boot times. While it would have been nice to see some UEFI BIOS action, the hybrid version will do well enough for a lot people especially those who prefer the familiar blue BIOS screens. And, the system’s stability is very evident as well running perfectly even when pushed to its upper limits while dong the overclocking thing.

Speaking of which, in terms of overclocking, GIGABYTE’s Easy Tune 6 also works more aggressively with Sandy Bridge and the motherboard compared to our previous P55A experiences. I often hear users question why would overclocking software have 3 or 4 automated overclocking selections if one or two will never be stable. So, it’s nice to see ET6 provide stable level 3 or 4.1GHz overclocking with Intel Turbo Tech still enabled. Perhaps in future ET6 updates, the software will provide the option for working with high end overclocking memory as well as adjusting the timings.

Audio quality doesn’t take a back seat this time around. Thanks to good implementation, the overall audio quality scores a Good rating which is evident when listening. It’s free of any odd noises and has some audio muscle when you need it like listening to your favorite club beats, or dishing out some “pwntatoe” soup to your enemies in game.

Thanks to some additional tests, we found that the impressive heatsink implementation also resulted in a thermal friendly platform.

In terms of performance, the GA-P67A-UD7 is an aggressive Sandy Bridge platform that would please many enthusiasts. It will definitely keep up with your triple SLI or Crossfire setup. All that’s needed is you digging a little deeper into your wallet for the $300 to $330 USD needed to procure one. The GIGABYTE GA-P67A-UD7 is definitely the motherboard meant for enthusiasts who want the best features and performance.