GIGABYTE’s P67A-UD7 is a motherboard that is targeted towards gamers and overclockers. Thus it only seems fitting that an unlocked Intel Core i7-2600K LGA1155 Sandy Bridge processor be the brain of choice. Here’s the break down of our test system:

We’ve changed up a little since last year. This time around, Sysmark 2007 was used to benchmark overall system performance. It uses every day, real world applications we commonly use in the office or at home giving us a better representation of the benefit of any upgrade that we introduce. Other benchmarks include Cinebench R11.5, Unigine Heaven 2.0 Demo, Input/Output storage performance, Rightmark Audio Performance, and end with a power consumption test. We also do a quick listen to component noise to ensure quality of the build.

Checking Out the P67A-UD7 Overclocking Features

Quite a few people have said it’s more difficult overclocking Sandy Bridge through the BIOS. I beg to differ. Lynnfield and Gulftown often require pushing the CPU to certain frequencies before the memory divider needed could be reached. If you have 2400MHz DDR3, that’s quite the feat. By default, P67 memory frequencies and CPU bus settings match up more easily. An inexperienced overclocker should be able to pick it up more quickly than before. And if not, there’s always Easy Tune 6. 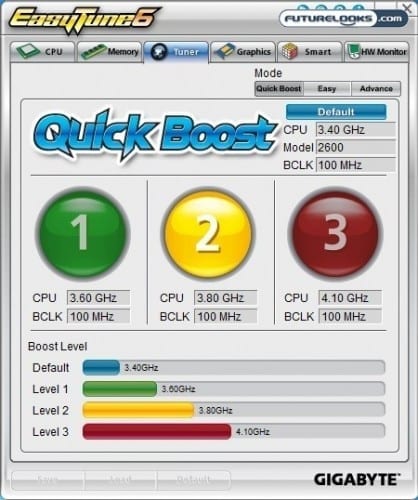 Using GIGABYTE’s Easy Tune 6 utility, I was able to select the highest option (the red button of course) pushing the system to 4.1GHz. The maximum setting was stable through all benchmarks. Unfortunately, the memory frequency options don’t offer anything higher than 1866MHz even when using Kingston’s faster 2133MHz DDR3. And, the timings can’t be changed either. The only way to make that happen was through the Hybrid BIOS. So, Easy Tune 6 is great for quick overclocking. But, it doesn’t offer a full plate in terms of all the minute options. 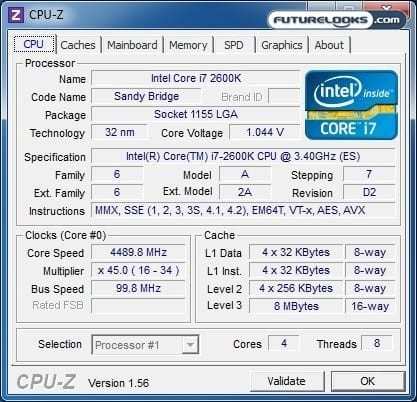 Ultimately, reaching 4.5GHz required nothing more than enabling Intel Turbo Tech in the BIOS while running Easy Tune 6. And, even then, the system was again stable throughout more stress testing. This is the easiest out-of-the-box overclocking experience I can recall in the past couple years. Users at home can expect very similar results.

This new benchmark uses today’s most used desktop office and professional applications and gives us an easy to compare overall score. As a result, users will be able to gauge how a single upgrade could affect system performance, and especially, what types of applications will benefit from it. 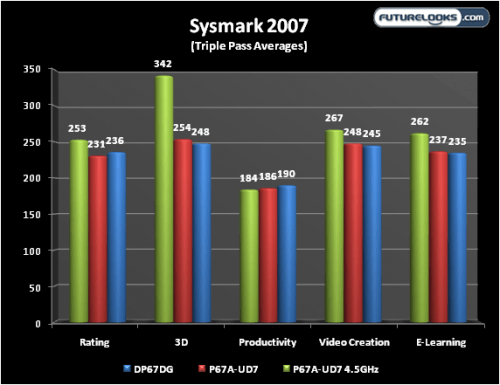 Intel’s platforms are often very highly tuned for efficient application use. It’s nice to see the UD7 show off a few of its own special features by raising the bar in some tests, overclocked. In particular, 3D which isn’t the gaming definition. This is brute force rendering using applications like Autodesk and 3D Studio Max. All of which utilize the memory and CPU heavily. This also explains the high performance in the video creation section.