Search
Home
Reviews
Prev3 of 8Next

Laying It All Out 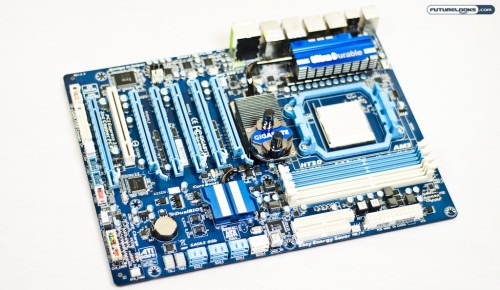 The GIGABYTE GA-890FXA-UD7 has the benefit of feedback from some of the most hardcore enthusiasts in the world. Their GIGABYTE Open Overclocking Championship program has brought the best together to provide first hand feedback on their boards, and to give the community the opportunity to show GIGABYTE in person what they should or shouldn’t do when they build a board. I guess they mostly listened since they still included a floppy and IDE port on a state of the art motherboard. It’s seriously time to let go of these legacy components.

In addition to the much improved color scheme of GIGABYTE’s boards, the GA-890FXA-UD7 has some other nice layout niceties. 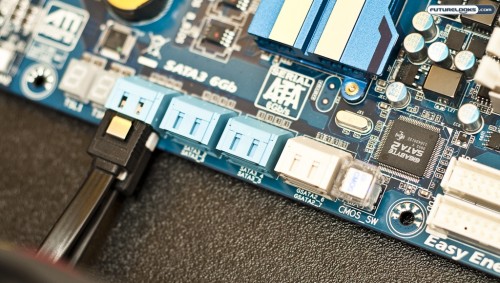 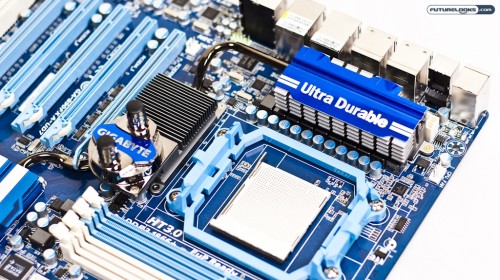 The GA-890FXA-UD7 also has a fairly aggressive heatpipe based cooling system which connects all the toasty hot components for optimal heat dispersion. It is taken up a notch with the inclusion of a waterblock for placing into your water cooling loop. There is also plenty of room for heatsinks of any size until you do this… 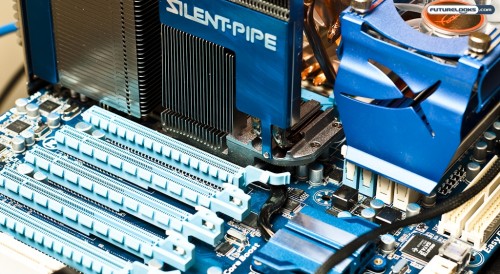 The Hybrid Silent-Pipe2 cooling system replaces the waterblock with a passive cooling system that is touted to reduce temperatures by another 30%. I’m a little skeptical about it’s effectiveness since so little of the mounting piece actually makes contact with the northbridge when installed with four small philips screws. 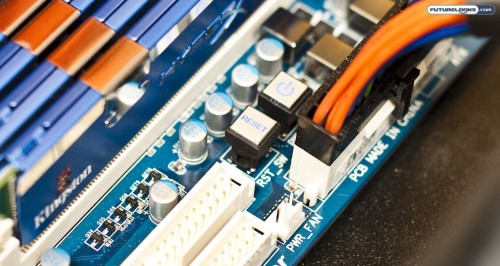 Since many enthusiasts tend to use open test benches, GIGABYTE has included reset and power buttons (including a CLR CMOS button) to allow easy access to the most utilized switches when dabbling in overclocking. 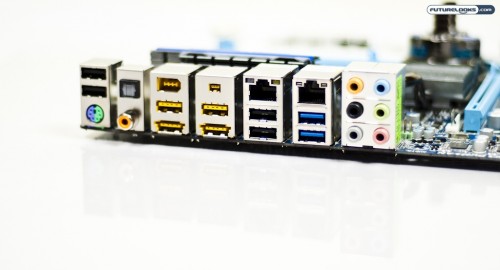 Moving to the IO ports, you’ll see GIGABYTE’s unique yellow eSATA/USB ports. Basically, they work as USB 2.0 ports when not being used as eSATA ports and vice versa. This saves space and allows you to gain a few more USB ports in the process, where you otherwise wouldn’t have them at all. Both sizes of Firewire ports are included, though we’ll probably see these being phased out as the superior USB 3.0 takes over the world.