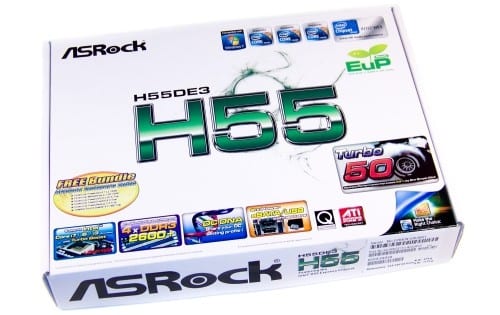 A lot of folks think in order to be mainstream, that they need to buy the best of the best PC hardware. They worry they’ll have to fork out quite a bit of money just to enjoy the benefits the latest computers have to offer. Thankfully, this isn’t always the case especially if you keep checking back here often. We always seem to find alternative ways to keep upgrading costs down. Take ASRock’s H55DE3 Motherboard for example.

ASRock’s offering supports the latest Intel LGA1156 Core i3, i5 and i7 processors as well as any other component you can add to it. It even supports the current home theater PC champion processor, the Clarkdale, that has an integrated graphics processor so you’re spending even less to enjoy owning a mainstream system. Of course, you can always add a good video card so it becomes a gaming system. We did! 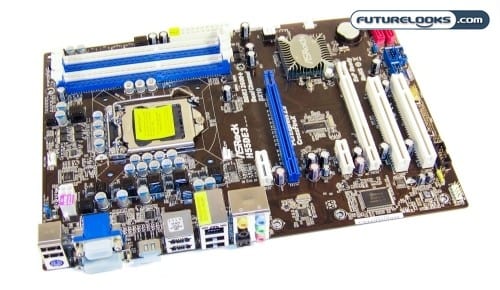 ASRock’s H55DE3 Motherboard supports any LGA1156 “Lynnfield” and “Clarkdale” processor. The Lynnfield doesn’t have integrated graphics while the Clarkdale does. That means, you can build a system and not have to buy a graphics card. Because it’s powered by the Intel H55 chipset, the motherboard has DVI, Optical SPDIF, and HDMI ports so you can access the integrated graphics.

Otherwise, the H55DE3 is a full sized and fully loaded ATX motherboard with all the regular bells and whistles, but also built for media. The board offers VIA’s VT1718S integrated audio codec coupled with Q-Sound. This is a 7.1 channel high definition feature aimed at providing audio for home theater and high quality 2-Channel experience. This should work well for headphone aficionados but clearly won’t be a match for the awesome ASUS Essence STX Headphone Amp Card.

The Sound Blaster Live X-Fi MB feature was something we were really looking forward to checking out. It was listed on the product web page and even the box. Unfortunately, what we found out was that it actually trial based audio software that you will have to pay extra for to keep it working indefinitely. Though it emulates some of the audio quality via the driver software that you may have heard from Creative X-Fi based sound cards, it’s no hardware solution. While it gets you mostly there for a fraction of the price, it’s definitely a bit of a bait and switch in our opinion.

The H55DE3’s box advertises another new feature called Turbo 50. This is ASRock’s latest overclocking software that can run a processor to 4GHz via the software. It’s also accompanied by OC Tuner, Intelligent Energy Saver, and EUP ready for those that need to save power rather than needing to overclock. We know Turbo 50 is supported by the H55 Pro, but maybe not the DE3 as we’ll cover in the overclocking section.

Overall, the ASRock H55DE3 will easily support HD-DVD and Blu-ray 1080p video whether it be using a Core i5 661 or an up to date PCI Express 2.0 video card. If the board will be used in a gaming system, you’ll obviously want to pick up a performance video card. Otherwise, the Clarkdale processor will more than suffice.

Well, there’s not much in the box to be honest. This is a pretty darn scant bundle right down to the manual. There’s only two red SATA cables, the usual IO Shield, driver disc, Intelligent Energy Saver and Instant Boot quick reference sheets, and Reference Manual. 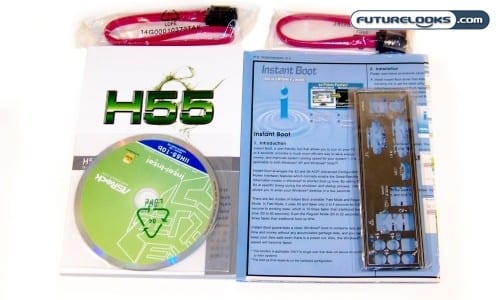 Unfortunately, there was no BIOS manual in the box. We know that the budget boards tend to have very basic BIOS settings, but it’s still a good idea to have one for reference. The included Quick Installation Guide covers just that, but only covers about half the software. If someone has more important questions about OC Tuner or Turbo 50, there won’t be any answers in the box.

One thing also missing from the box is the Crossfire video card bridge. In the past, motherboard vendors have included them because video cards bundles don’t include them. It’s probably a case of who should have to include it to cut down on costs. They aren’t an easy item to readily find available at every PC store. So, be prepared to spend a few bucks when you do.