As per Standard Operating Procedure (SOP), the overclocked system has to pass three iterations of Sysmark 2007 or we don’t count it as stable. That said, the suite consists of programs that test the entire platform’s features and sub-systems under real world applications. The benchmarks include: Sysmark 2007, CineBench R11.5, 3DMark11, Metro 2033, RightMarkAudio Analyzer, input/output performance, power consumption and a quick quality control spot inspection.

Power Consumption was measured using a power meter from the outlet. The Quality Control test was performed utilizing our check list and a laser thermometer. We look for any manufacturing issues like assembly problems, damaged heat sinks or substandard components, even crooked ones. We’re also hunting for EMF, circuit noises and any unusual hot spots. 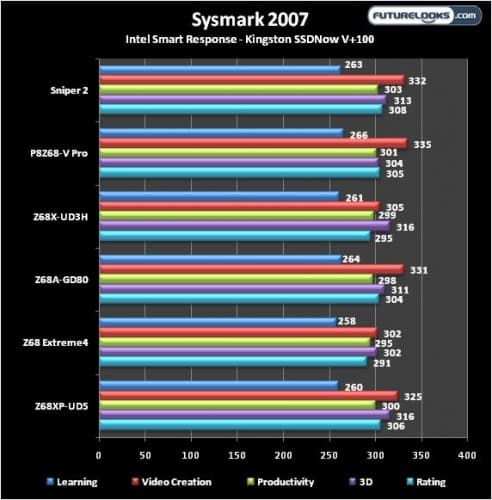 After all the fine tuning was finished, the GIGABYTE G1.Killer Sniper 2 and ASUS P8Z68-V Pro fight for the top spot. It’s most likely the extra premium components on the Sniper 2 that give it a bit of an edge despite the extra technology the ASUS has with some additional processors. Given the close range of scores, I think the Z68 is running about as well as it can.

Rendering in this benchmark is very CPU intensive and sensitive to things like core frequencies and the responsiveness of INTEL’s Turbo Tech (ITT). Because this board is rumored to have better, quicker ITT tuning, we tested both locked and Turbo settings. 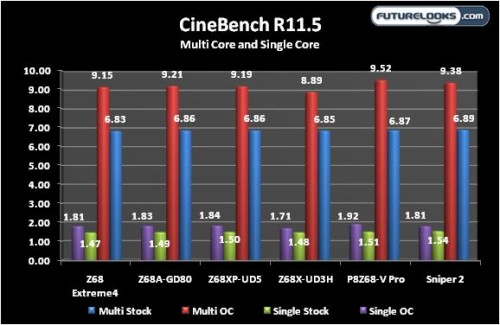 Stock performance shows us the best basic CPU and motherboard tuning. The Sniper 2 shows us some strong performance at normal settings. While the Sniper 2 showed us some decent overclocking performance, the ASUS P8Z68-V Pro is still just a bit more aggressive, showing off the extra parts that it has at its disposal. Still, the Sniper 2 outpaces its regular desktop siblings which is expected on a premium platform. 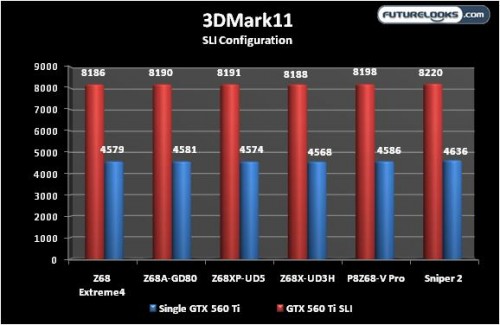 Locking down the BIOS settings to match as close as possible across the bunch, the Sniper 2 just out paces the ASUS which has consistantly performed faster than the rest. It’s not much, but enough to take the win overall. Interesting to see that in a straight up fight, the G1.Killer Sniper 2 does take the lead, albeit a small one. 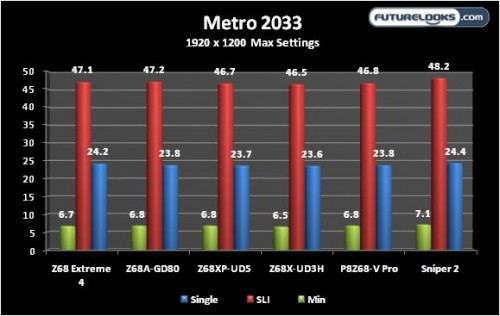 This game simply slaps gaming systems around at will no matter what you’ve got inside the box. After running the benchmark several times, I found the Sniper 2 just ever so slightly quicker using one video card and just a bit faster in SLI mode. 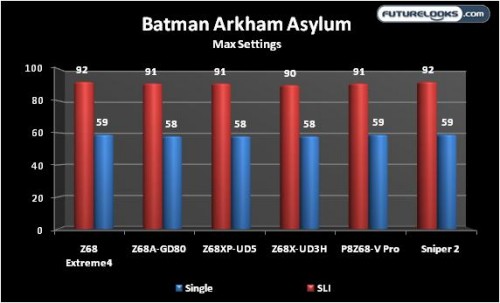 The bottom line here is that the video cards are running as fast as they possibly can on the Z68 PCIE bus. It’s hard to believe a DX9 game can look so good compared to a DX10 or even some DX11 games. Either way, we’re glad to see Physics and extreme details don’t give the Sniper 2 any problems. 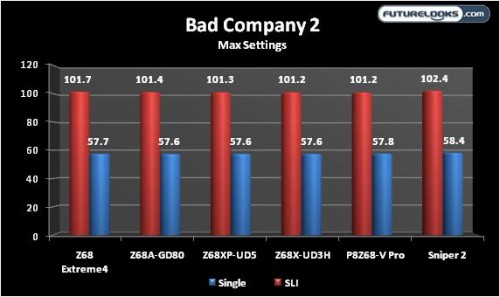 Since I used BC2 in the original G1.Killer Assassin review (and maybe the upcoming Assassin 2 review), I thought I’d toss it in here for good measure. What this shows us is that the video cards are the limiting factor, if you can call just over 100 FPS at max “limiting” to any degree.

For this round of I/O testing, I only tested our two PLX friendly Z68 boards and the full PCIE speed X58 Assassin for comparison. In the round up, there wasn’t a lot of difference. The thing to note is the performance of the SATA3 HDD versus the Kingston 64GB V100+ SSD using the native SATA2 ports. 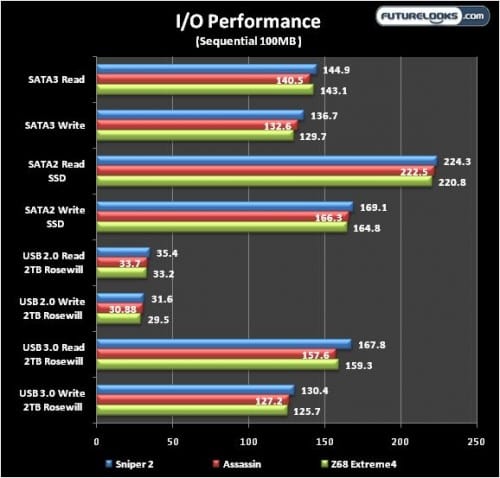 Run after run, the X58 was just a little slower. The SSD smokes the SATA3 HDD test as expected. The only thing faster would be using a SATA3 SSD in those ports. Overall, the Sniper 2 stretched just a bit further ahead, shining well in the USB 3.0 test as well. Good implementation is probably the main benefit and it’s nice to see the added benefit of on/off charge from GIGABYTE giving extra power to those ports so you can keep your cell phone charged in between games.