The objective here is to compare the motherboard’s audio performance bit more objectively than with the human ear. Using the latest drivers, RMAA is pretty reliable when detecting poorly integrated audio solutions. As a double check, we use a pair of high quality Seinnheiser PC370 headphones to help us confirm our results as well as allow us to detect any noise that is distracting to the human ear. 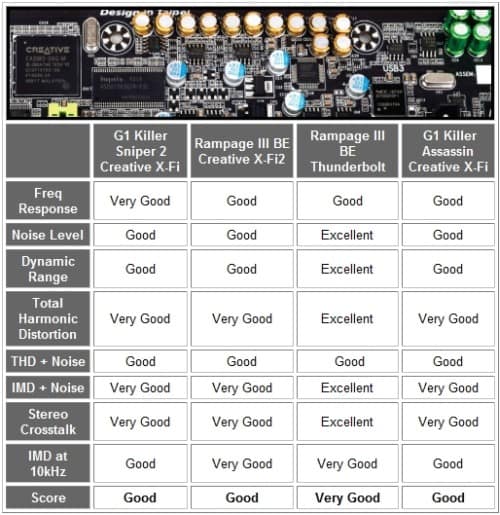 Since this year has been the rise of the gamer motherboards, these are the test results for the most prominent integrated and bundled audio processors. The scores between the X-Fi are extremely close. What you can’t hear is the audio level and clarity that comes from the front panel amplifiers. It makes my not so elite speakers/headsets sound good and the higher end Klipsch speakers and Sennheiser headset sound amazing.

However, the Thunderbolt card sounds fantastic at all times whether in game or not. It doesn’t matter that it’s only giving you high end stereo, it sounds great even without the 5.1 surround. My favorite DJ RKade mixed music really sounds sweet on this setup. You get every ounce quality from high end audio playback.

Is the Network Performance Killer?

Having a Killer E2100 NIC has some benefits.  The Killer Network Manager will automatically prioritize games and most supporting programs like chat at the top. While a greater average of regular gamers don’t need the feature, latencies and response times to servers can be cut especially in games like Left 4 Dead 2 that rely on the Windows network stack while hosting the server. 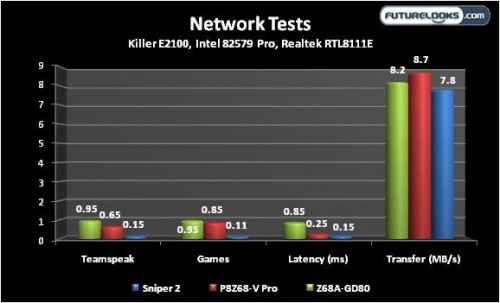 Common NICs like Realtek and Intel LAN Pro favor file serving and typical web networking. The common RTL8111 sits on the highest amount of bandwidth. The E2100 is just about 1MB/s slower as it doesn’t set typical use at high priority. Intel LAN Pro balances a little of both with bandwidth in between.

However, the E2100 shaves a ton of latency off most anything that has to communicate with network traffic especially games and VOIP programs. Intel LAN Pro again balances the afore mentioned and latency. Realtek is far more latent as it doesn’t prioritize anything by default. When it comes down to it, this is an advantage that can benefit any gamer playing multi-player games. 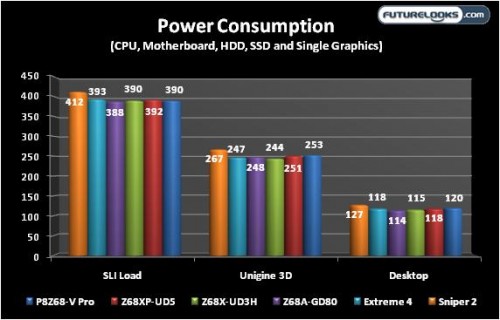 Power consumption is usually pretty uneventful since most of the platforms share the common Z68 design specs. However, the extra features on the Sniper 2 do need a bit more power as they should, even though they are embedded or integrated. They don’t need a lot extra but some. And, 99% of the regular or high end users simply won’t mind.

As far as quality control goes, the board does not suffer from any of the things that cheaper boards seem exhibit. Everything on the Sniper 2 was mounted straight as an arrow, and we did not notice any hot spots or squeaks from capacitors, even under heavy load. 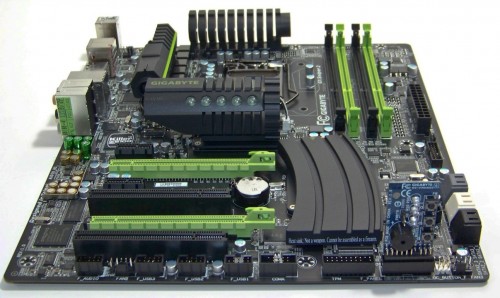 In rating the GIGABYTE G1.Killer Sniper 2 motherboard, I had to consider the integrated versus the external peripheral argument. On the one hand, if the audio or network go out, users will have to RMA the entire board. Add-on cards can simply be swapped out but do take up slots which could be used for other things. Five years ago I would argue in favor of using add-on cards given their very limited track record quality. But as of late, I haven’t heard of many boards losing their integrated LAN or audio. Boards have just gotten a lot better, especially when it comes to protecting themselves from surges and other power anomalies. I find myself liking the new high end integrated gaming features here and the simplicity it brings.

Overall, the GIGABYTE G1 Killer Sniper 2 is simply an awesome motherboard. Avid gamers expect a very good experience from their high components as well as easy setup that gets you in the game quickly. The higher end Creative X-Fi audio which really livens up the gaming experience and the Bigfoot Networks Killer network processor that sets your games up at the top of the network priority pile. Start up programs should no longer lag your system and your opponent shouldn’t be able to sneak up on you any longer. Add some dark PCB and weaponized looking heat sinks for effect and you now have an unmistakable gaming motherboard. The extra benefit of some high end overclocking is just some sweeter icing on the cake should you choose to experiment when not gaming.

The only thing missing really is support for more than two GPUs. But since most mainstream gamers run a single or at most a dual GPU setup for SLI or CrossFireX, this board should serve you well. Especially since the usual upgrades to better network and audio are already taken care of in the box. If you do have to populate your board with the maximum amount of GPUs, then we suggest you hold tight for our upcoming G1.Killer Assassin 2 review.

Searching for the G1.Killer Sniper 2 online revealed pricing anywhere from $330 to $360 US/CA depending on the store or promos that are running. Fortunately, this price is backed up with nice peripherals and its ability to overclock well. If you can find this board, and if you’re a gamer that puts overall performance and ease of setup over all else, you might want to grab it pretty quick as it’s not one to stay in stock very long. GIGABYTE clearly has it right when it comes to reaching the mainstream PC gamer that wants to enjoy every session.