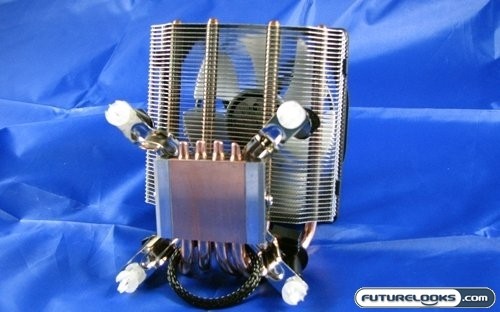 Due to the design of, and intent behind this cooler, the airflow from the fan isn’t directly blowing onto the CPU. Rather it’s directed off-centre, and at an angle away from the CPU to the most common location on the motherboard for the voltage regulation components. As for mounting the heatsink, the Silent Spirit comes with the hardware for mounting it to an Intel rig installed by default. With a couple twists of a screwdriver you can easily switch this mounting hardware to something more AMD compatible. Both mounting solutions still use the plastic OEM mounting bracket that should have came with your motherboard. 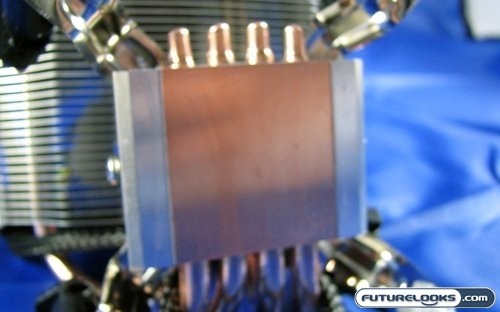 The actual plate the makes contact with the CPU is made of copper, and is bonded to the copper heatpipes. The surface of the contact place isn’t all that shiny, and doesn’t appear to have received any type of lapping treatment. That being said, it does come with a generous dose of GELID’s GC1 Thermal Compound already applied. We ended up cleaning it off for these pictures, which came after installing and removing the heatsink. Usually lapping the contact surface on a heatsink can greatly increase it’s contact with the CPU, and make it a better cooler. We still have to see how well this cooler performs against our reviewed CPU coolers.

To test the GELID Silent Spirit CPU cooler we ran a few stress tests that maxed our the CPU, which of course produced the most heat and put the most strain on the cooler. The CPU cooler was installed in the following test bed.

Throughout this review I’ve made several comparisons between the GELID Silent Spirit and the old Arctic Cooling Freezer CPU Cooler, even though I wasn’t able do any hard testing using that cooler. Though I do own one, it’s unfortunately tied into a system that cannot be taken down. Instead I used the cooler that is most commonly seen adorning my test rig, the Cooler Master Hyper 212. This cooler is a beast compared to the GELID Silent Spirit, and both coolers are being tested on a CPU that is at the maximum supported by the GELID cooler. I think it goes without saying that I think we all know where this is going.

It really should be no surprise that the monsterous Cooler Master Hyper 212 blows the GELID Silent Spirit out of the water in thermal performance in our main tests. The two coolers are a class or two apart. The GELID is a medium range cooler, and though it can cool a top end Phenom, it doesn’t have a whole lot of headroom. It still does an admirable job under this most stressful conditions. When cooling a processor with 1/2 to 3/4 of the thermal output of the Phenom 9850 we used in testing, it should do much better.

Acoustically, the GELID produced the same results as it did in our thermal tests. As mentioned before, the fan on the Silent Spirit is a PWM powered model. As temperatures rise and more stress is placed on the CPU, the BIOS will drive up the speed of the fan to its maximum. Since we are using the top supported CPU, the fan was very quickly driven to its maximum speed, which means it got a little noisy. The Silent Spirit was much more audible than CoolerMaster.