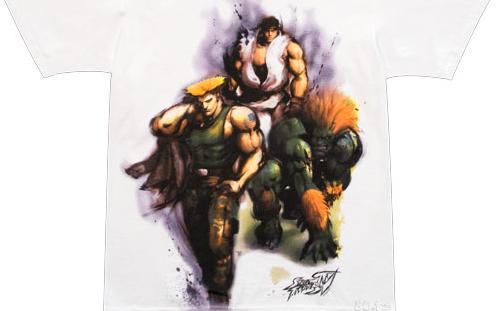 Want to give a cool give to the Sonic Boom warrior or Sub-Zero kombatant in your life? Don’t want to break the bank doing it while still offering something that is reasonably original and unlikely to be found elsewhere unless you happen to hang out with a lot of other fighting game geeks? Then consider a simple t-shirt inspired by our favorite games.

I was able to find the Street Fighter IV-inspired t-shirt above through a quick search on eBay and you can probably find it through a variety of different online stores as well. Just as you can easily find a range of retro shirts that kick it with Mario, Pac-Man, or Space Invaders, you can just as easily find something with a great graphic from Street Fighter, Mortal Kombat, or Soul Calibur. 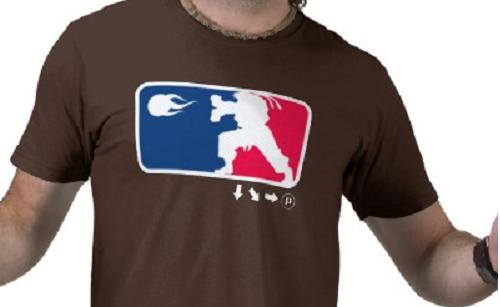 Some of the best shirts are the ones that come with some kind of convergence or crossover appeal. The brown shirt above, for example, is meant to take some inspiration from the logo for Major League Baseball while showing lone wolf Ryu busting out a fireball. The little directions in the bottom-right corner are an added bonus, since the “hadouken” motion is positively iconic for fighting game fans.

The Cosplay for the Everyday Warrior 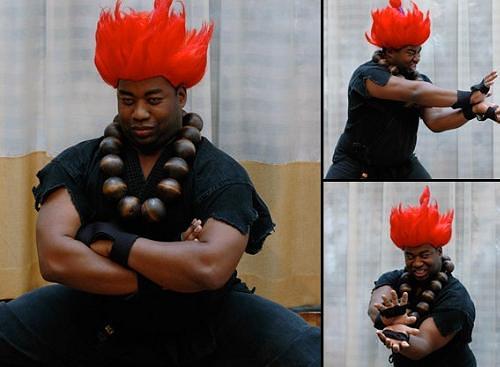 Sometimes, a regular old t-shirt just won’t do. Sometimes, they’ll want a little bit more to express their dedication to the Satsui no Hado. Sometimes, they want to put on a remarkably stiff wig so that they can imagine they are performing a Raging Demon of some kind or another.

Yes, it can be Halloween every day for the Street Fighter fanatic in your life. Yes, he’s going to get some strange looks from random passers-by and it may look especially odd when a black Akuma happens to walk down the street, but so be it. This is fighting game fandom to the nth degree. It’d also make for a great costume for when (not if) the recipient makes his way over to Comic Con.

The Akuma/Gouki costume shown above can be found at HalloweenCostumeSale for about fifty bucks and it comes with the gi top and bottom, rope belt, fighting gloves, and a prayer bead necklace. Unfortunately, the flaming red wig is not included.

You know those keychain remotes that can be used to make a variety of sound effects? They usually get you to press a single button and then it can let out some kind of amusing sound. Well, this Street Fighter keychain takes that to a whole new level. 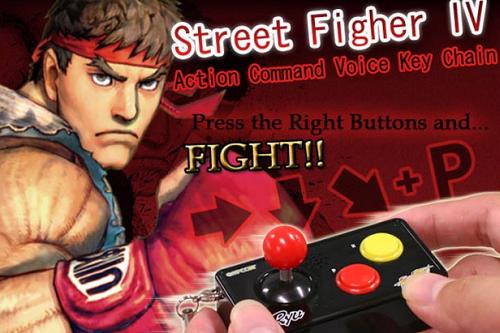 Sporting the appearance of a mini arcade stick, the keychain comes in four varieties: Ken, Ryu, Chun-Li, and Dhalsim. Instead of hitting a single button to let out a sound, you actually go through the motions to “perform” a special move. Do a shoryuken to get the keychain to yell out, “Shoryuken.” This includes not only the regular special moves, but also the super arts! Better still, this keychain is only about $13

If All Else Fails, Find Some More Fighting Games

Taking a chance on a more creative gift, like the Mai figurine or the Akuma costume, may solicit more surprise on Christmas morning, but you may be more inclined to take the safe route during this holiday season instead. Depending on the console of choice, your favorite fighting game fan may want a copy of BlazBlue, King of Fighters XII, Soul Calibur: Broken Destiny, Virtua Fighter 5 Online, or reaching much further back, Dead or Alive 4.

Whatever the case, remember that not all gamers are made alike. The big fan of Halo 3 ODST might not be all that excited about Forza Motorsport 3, just as the guy who fought Justin Wong might not be particularly enthralled with Final Fantasy XII.