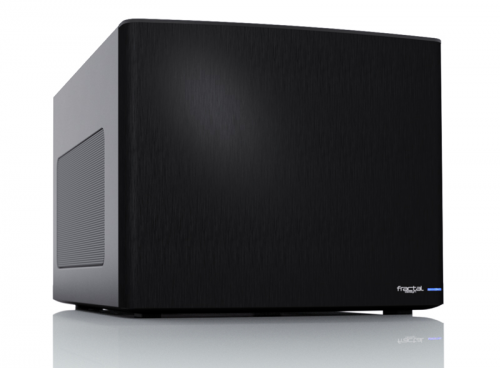 There are several major factors you must consider when selecting a new case for your current system, or selecting a new case for a new build. Although Futurelooks isn’t in the business of recommending specific PC chassis’ to people, we are in the business of showing people what to look so they can see what they want or need. For example, many of us think that we need an enormous full tower to get all the performance out of a system, when in reality, we might need the “right sized” case. And that’s why we’ll be looking at a Small Form Factor (SFF) PC chassis called the Fractal Design Node 304 which gives a lot of features and functions in a smaller foot print.

Motherboard selection is limited to most mini-ITX or DTX motherboards and still has two expansion slots which will most commonly be used for a GPU, but in the case of a file server, a hardware RAID card would also be a good choice. 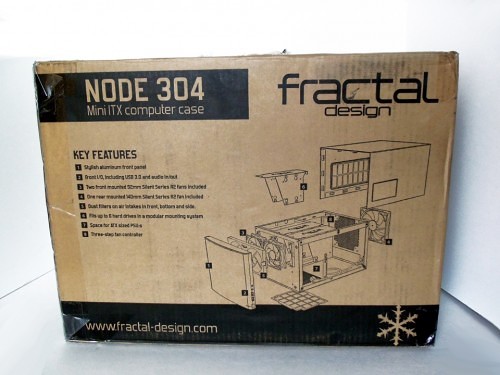 The case comes with three Silent Series R2 hydraulic bearing fans (one 140 mm for rear exhaust and two 92 mm fans for front intake), and a built-in fan controller with three connectors which adds a lot of value to the package. You will also find dust filters over the large side intake for your dedicated graphics card, a filter over the front intakes, and a filter for the PSU. The front I/O has 3.5 mm mic and speaker jacks, Power button, and two LED indicators for power/HDD use. There is also support for USB 3.0 via two front connectors.

The Fractal Design Node 304 is an all steel frame and with a solid aluminum face plate. There are no external ODD slots for this case which was done to save space. And speaking of premium, the price of the Node 304 thankfully is not. It can be found for less than $99 US at most retailers. 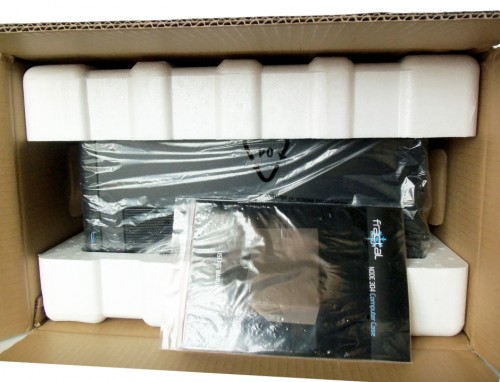 The box for the Node 304 itself is not impressive at all with the plain brown box and black writing. While not eye-catching, it does protect the product adequately in shipment and will be forgotten once  you get it home to the workbench. Inside you’ll find a user manual, your standard bag of accessories which includes all your screws, stand-offs, but only three zip ties.There isn’t much else notable in the box, but there isn’t much you can add here either (except for maybe a few more zip ties). The Node 304 appears to have the features we want from a SFF case so lets get down to investigating them more closely. 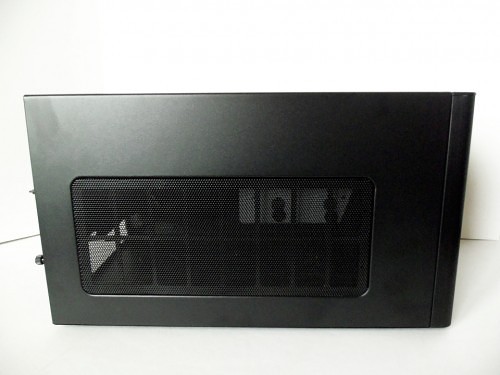 The Node 304 has one of the more attractive designs for a small form factor chassis. The simple, clean lines are complemented well by a black matte surface. The face is a solid piece of brushed aluminum carefully painted to match the black of the rest of the case. This is very hard to do thanks to the difference in the natural reflective surface of aluminum and a very nice touch here. We can picture the Node 304 as the chassis of choice for an HTPC or media server. The matte black and soft curves should mate well with your other home theatre components as well.

The front I/O is located on the lower right side of the case just in front of the PSU exhaust vent.  Starting at the top, the 3.5 mm mic and speaker jacks are very well spaced apart. Then you have a pair of USB 3.0 ports (backwards compatible with USB 2.0) which are rather close together. I found it hard to use both USB 3.0 ports when using my Corsair flash drive due to its wide body design. Thinner USB devices or cables are best used here. Finally at the very bottom is the power button, making it a little less easy to hit it by mistake. 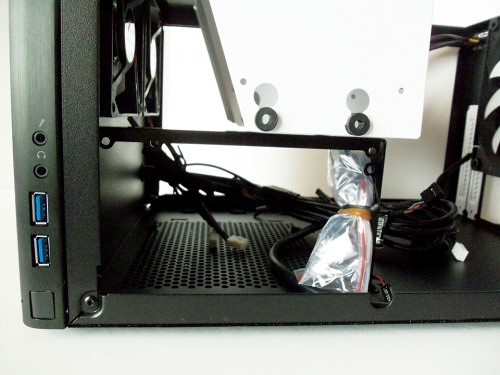 In front of the power button is a blue LED indicator light in a thin slit in the face. Below the front bezel you will find a white LED indicator for the HDD use. While these are fairly bright, they are not distracting as their angle (if the case is positioned on your right) faces away from you. We would also like to have seen the power LED be white as well to match the rest of the case’s color theme or even a way to dim it. 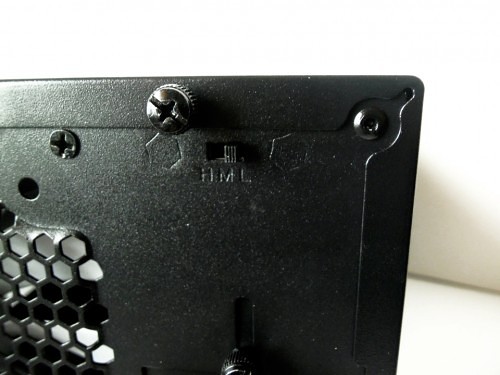 The rear of the case has a very striking appearance as the 140 mm fan takes up nearly 60% of the back panel. There is an issue with the placement of this fan and I will go over that in detail later. Speaking of fans, the Node 304 also has a 3 speed fan controller with three 3-pin headers. This gives you quick and easy access to the fan speed by placing your hand on the top left corner and moving the switch with your finger tips to the desired position of low, medium, or high. Initially we thought this would be inconvenient, but it works very well thanks to the small form factor of the case.

Now that we have a clear idea of the case’s style and appearance, lets move on to the interior.