Sure the NVIDIA 9800 series of video cards are the current crème de la crème of gaming performance, but what if you don’t have the scratch to afford such a beast? Well that’s where the NVIDIA 9600 series comes in. Foxconn sent us over their pre-overclocked 9600GT. As an overclocked card, it should give us a bit more kick than your standard garden variety card. Let’s check it out! 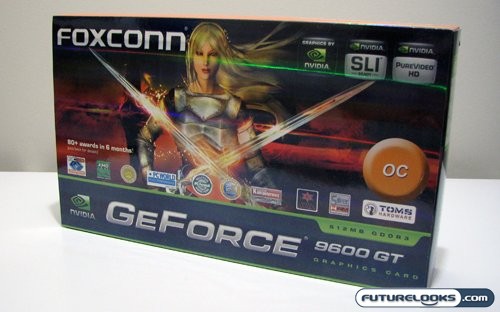 For a few generations now, the x600 series of each NVIDIA chipset has been the midrange workhorse. They generally provide moderate performance at an equally moderate price, and are the cornerstone of many a budget gaming box. The NVIDIA GeForce 9600 GT graphics chip is no different; offering performance that should get you into most games and a price that allows you to upgrade to a full SLI rig later on. Eventually, as the product line matures, we’ll see new cards with different memory configurations and feature sets. For now it’s just the base model 9600 GT, with a slight overclocked twist courtesy of Foxconn.

The video card we’re looking at today isn’t just a base GeForce 9600 GT. The tweakers over at Foxconn has taken the stock card and, much like they did to the 9800 GTX we reviewed, have overclocked it to give an extra performance boost. All this is packaged into a single slot design that is said to be both cool and quiet. 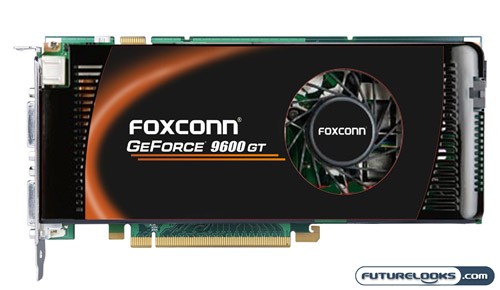 As for how much of an overclock Foxconn managed to eke out of this card, let’s run down the numbers. At stock speeds, the NVIDIA GeForce 9600 GT has a core clock of 650MHz and an effective memory clock of 1800 MHz. Foxconn raised these numbers to 700MHz and 2000MHz on the core and memory respectively all while still using the reference heatsink and fan design. The rest of the specs for this card can be found below. Full details can be found on the product home page.

When it comes to pricing, things become a little muddy to be honest. The Foxconn card itself is somewhat difficult to find in North American retail outlets, but the closest competitors in specification seem to range from $180 to $200 USD. Should you find the Foxconn 9600GT-512NOC video card specifically, it would be reasonable to assume it’ll run in the same price range.

So will this video card be the David to our 9800 GTX Goliath? Or will the comparison be more similar to that of Newton to Hercules? Let’s find out.