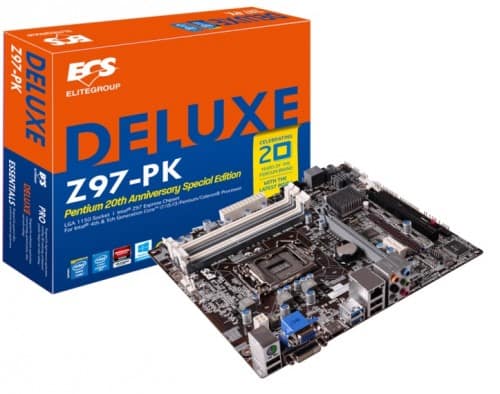 As the resident AMD guy here at Futurelooks, I am all about the price to performance ratio. Bang-for-your-buck is practically my middle name and not something that AMD exclusively holds. The recently released 20th Anniversary Edition Processors from Intel has everyone looking for a way to maximize their performance. The ECS Z97-PK has the best solution with its CPU One Key.

First, you buy the Intel Pentium G3258 Haswell CPU at 3.2 GHz and pair it with the ECS Z97-PK with a decent CPU cooler. Then you activate the CPU One Key to ramp up the speed to a staggering 4.7 GHz to give you all the power you can get within your budget. You will be amazed at what a quality motherboard and a 4.7 GHz dual-core processor can do.

ECS Z97-PK provides everything you will need for your system, no matter what you are building. It has support for HDMI 1.4a, DVI output, VGA output, PS/2 connector, PCIe x16 Gen. 3 slot, six SATA ports, and support for up to 32 GBs of DDR3 1600 MHz RAM. No matter your build focus, you can be sure that you are getting the most out of your system thanks to the ECS Z97-PK. More information below. No word on pricing just yet.

19 August 2014 – ECS today proudly announced the unmatched motherboard in the market for the Intel® Pentium 20th anniversary edition processor, Z97-PK, has been released to all the fans that are searching for exciting overclocking performance within affordable price.

Since Intel® Pentium 20th Anniversary Edition Processors was announced during COMPUTEX 2014, users have been looking for the best combination to cope with this processor series, especially Pentium G3258 processor, which has unlocked multiplier and better performance than i3 Processor when overclocked. ECS provides the best solution, Z97-PK, the ultimate OC performance with unbeatable value, to fulfill the unmet needs from users.

Equipped with Intel Z97 Express Chipset, ECS Z97-PK with Pentium 20th Anniversary G3258 Processor can be overclocked beyond people’s expectation. One Key OC function can amazingly raise CPU Frequency to 4.7GHz, which is much higher than similar products from other motherboard manufactures, indicating the powerful overclocking capability of Z97-PK. More importantly, this best duo, ECS Z97-PK and Intel® Pentium 20th Anniversary Processor, has a lower price than just i5 Processor itself, providing users an unbelievably high C/P value with ultimate overclocking performance and affordable price.