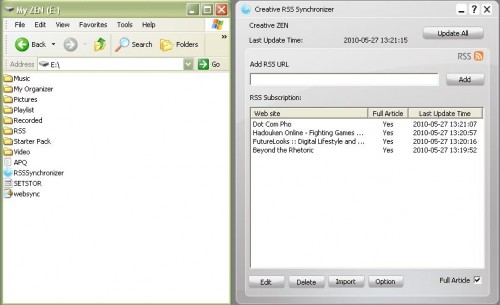 If you want simple plug-and-play functionality, you don’t need to install any software on your computer to send content over to the Creative media player. That’s because it shows up as an external drive in Windows, just like how a USB flash drive or external hard drive would.

Drag and drop your music in the Music folder, pictures in the Pictures folder, and so on. That’s simple enough, but some people may prefer using a more conventional “sync” software package; that’s up to you. One of the more unique features of the ZEN X-Fi Style is that it is capable of synchronizing with RSS feeds. It doesn’t have Internet connectivity on its own, so it will only sync when it’s connected to your computer. Add the feed URL, hit Update All, and you’re good to go. 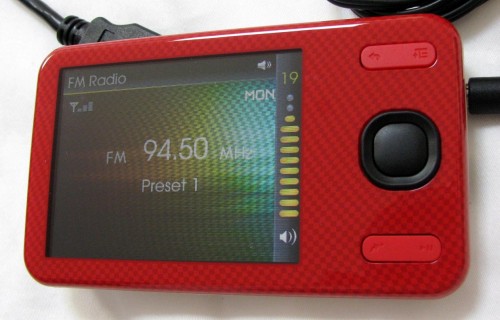 Not surprisingly, the audio performance on the Creative ZEN X-Fi Style isn’t the best when you use the included ear buds. They’re cheap and give you a “radio” level of quality; that’s why I tested with some premium earphones, as well as a set of Ultrasone DJI Headphones.

In terms of audio performance, the X-Fi engine is supposed to do all sorts of wonderful things. While I wasn’t exactly disappointed, I wasn’t blown away by the audio quality either. This was true of rap, rock, pop, and alternative. The video quality isn’t anything to write home about either. This is a color display, sure, but the resolution is a mere 320 x 240 pixels (QVGA) and it’s only 2.4-inches in size. I wouldn’t recommend watching anything too long on there, particularly anything with subtitles.

RSS and Other Extra Functions

Beyond the FM radio, music player, and video player, the ZEN X-Fi Style actually comes with a nice set of extra functions. The voice recorder “app” can be useful for making some quick notes and these audio files can be transferred over to your computer quite quickly. 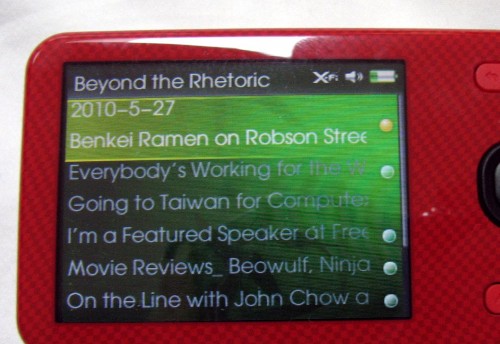 The RSS feed reader sounds like it could be useful on paper, but it’s more of an exercise in frustration when you actually come to use it. The font size is too big for a screen this small, so you can barely read one sentence at a time from your favorite articles. Further still, it seems to only pull the text from the RSS feeds. So, if you subscribe to something like the Futurelooks RSS feed, you won’t be able to see any of these great product shots. That’s an important part of the RSS experience! 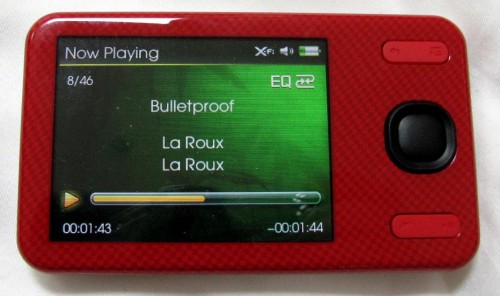 In the end, it’s quite clear that the Creative ZEN X-Fi Style falls quite short of the bar set by the Apple iPod. The menu interface isn’t as intuitive and the video quality is disappointing. Setting up playlists isn’t so fun either.

I wanted to enjoy some of the extra features that this player has, especially since that could give it a significant leg-up over the competition. Unfortunately, the execution leaves a lot to be desired and the RSS reader may as well not be there at all. Even so, the 8GB ZEN X-Fi Style is just $79.99 US. That’s about half the price of an 8GB iPod nano. If you’re looking for a bargain, this is a decent bet; just don’t expect it to be that great.