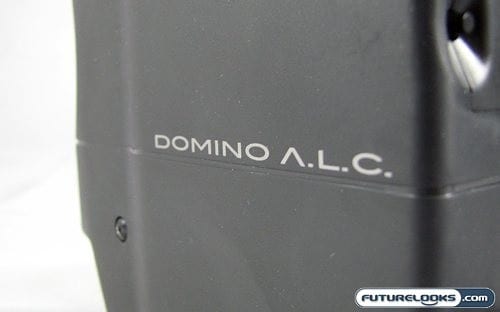 CoolIT Systems is known for providing high performance pre-built water cooling kits for enthusiasts with the money to push their hardware as far as possible. However the enthusiast market isn’t where they’re targeting their latest product. The Domino A.L.C. CPU cooler is CoolIT’s attempt to bring a high performance water cooler to the masses for as little money as possible. But this isn’t some half baked kit, produced with the idea of putting something on store shelves as quickly as possible. The Domino has spent over 12 months in research and development and was literally just released yesterday. Even with its recent release, the Domino has already been recognized by the Consumer Electronics Association with the 2009 CES Innovations Honouree Award in the field of Computer Peripherals. Say that ten times fast.

This award isn’t earned without doing some work though. The history behind this product is rather storied, as CoolIT’s CEO Geoff Lyon was quick to point out. It pretty well started with a whiteboard drawing mapping out every feature they have at their disposal and wanted to put into the Domino. This eventually lead to them building a cooler that Geoff claims will last 7 years at 50°C without leaking and needing a refill. They then went on to use the best thermal interface material they could, with cooling results even better then the TIM found on their previous coolers. They also focused on the retention mechanisms, rebuilt the radiator from the ground up, and made sure the Domino was safe, reliable, and the best performer it could be. You can check out all the specifications on the product home page.

Still, was all this worth it? Well I guess we’re going to find out in the following pages.

Sticker Shock…or Lack There Of… 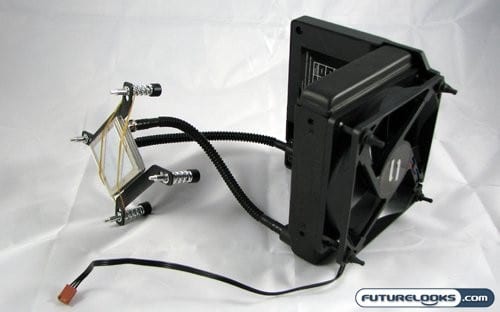 One thing CoolIT did nail was the price, to the point that even I was shocked when our own Editor-in-Chief, Stephen Fung informed me in our product brief. At the risk of sounding like a cheesy infomercial host, you can have all that is offered with the CoolIT Domino for the low price of $79 USD. That’s in the same price range as many high end air-cooled CPU coolers. So what exactly does one get for that price? Well we’ll have to take a look at both the physical package as well as the performance, and that will be done in the next few pages. 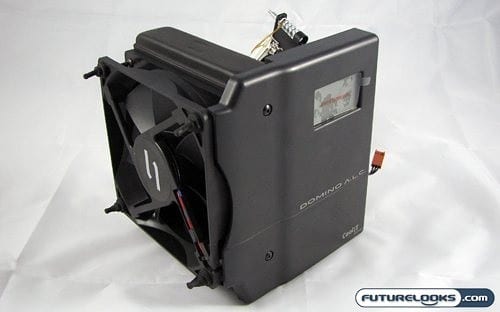 The main assembly of the CoolIT Domino is a fairly simple affair, especially when compared to some of CoolIT’s other coolers. This started in the design phase, as CoolIT laid the foundation for the Domino with the idea of a simple water cooler with a PCB for regulating fan speed. This morphed into what we see above. The main unit consists of a 120mm variable speed fan, radiator, and a housing that contains not only the aforementioned PCB, but also a status LCD and a switch along the leading edge of the housing to allow selection of three different thermal programs. 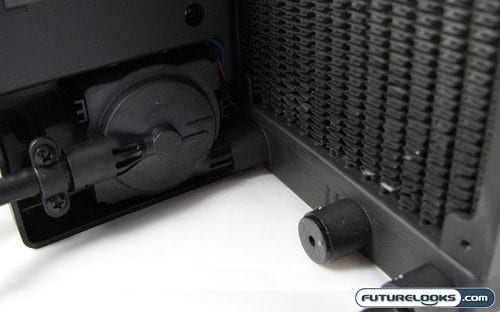 Moving around to the back, we see a few more of the components that make up the CoolIT Domino; specifically the CFF1 (Compact Form Factor Version 1) Pump, the radiator, and the warning buzzer. The selection and design of these components assist in driving down the space used by the Domino, and also address the advertised safety and reliability of this cooler. For reliability CoolIT went with a completely redesigned pump that used ceramic bearings, which can withstand fairly high temperatures. Then they went a little nuts, and decided to run the entire assembly through a shock and vibe test of up to 40G. I doubt we’d see many other coolers out there survive that. Should any component of the system fail, you’ll be politely but sternly informed by the very persistent buzzer installed below the rad.