The first real world benchmark we took a stab at was Supreme Commander. This multi-faceted real time strategy game has some much going on during gameplay that it takes a fairly decent computer to take care of everything. That being said, it certainly didn’t need all 4GB’s of RAM to manage what was going on during our benchmarks. The Corsair kit posted a score only 2% faster then the OCZ kit originally being used.

Surely Crysis, the unslayable 800 pound gorilla, would put some stress on our test system. Statistically the performance boost came out to 7%, but realistically that was only 3 frames per second of additional performance. 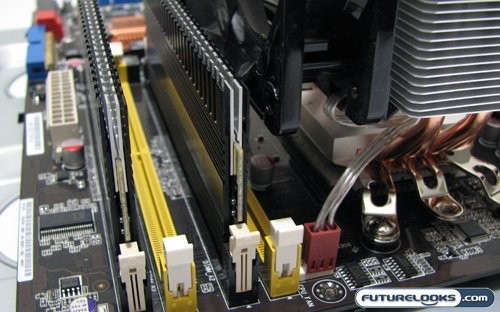 I’ll start off by noting that, depending on you perspective, the Corsair Dominator 4GB PC2-8500 RAM Kit either isn’t that great of an overclocker or good for what you are getting. Admittedly this RAM is already pretty tight for a 4GB kit under $150. Most DDR2 4GB kits only run at around 800MHz. Being able to squeeze a little more performance out of it would be a bonus, and we were able to bump it just north of 1100MHz on the default timings. We weren’t able to tighten up the timings too much, but the extra speed did garner some additional performance gains. 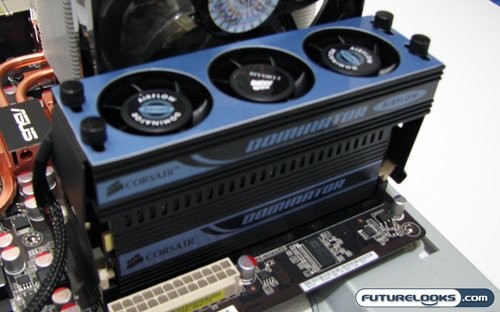 As for any thermal improvements using the AirFlow fan, we tested it by using an infrared thermometer to measure the surface temperature of the heat spreaders. There was a drop of 2°C present on the heat spreader when the fan device was installed, which meant it was going to be installed for all overclocking attempts.

The noise of the AirFlow cooling fans were noticeable, but not too terribly annoying. Since I use an open bench tech station, and not a closed case for testing, I didn’t have the luxury of having the sound deadened by surrounding electronics and case panels. In this environment, there was only a 2dB increase in ambient noise. The whir on the fans was what was really noticeable, and were they installed in a case like the Antec P182 I wouldn’t have even noticed their presence.