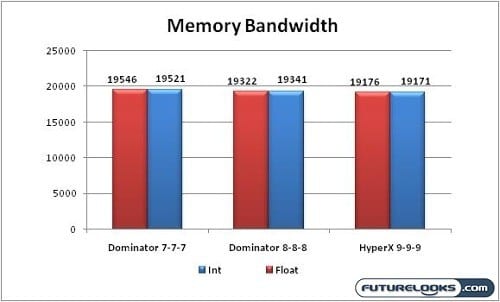 At stock settings, the lower latency Dominator produces a bit more memory bandwidth compared to to the higher latency Kingston HyperX 1600MHz DDR3 kit. As mentioned in the previous paragraph, the Dominator kit can operate at even lower timings with very little effort. The system received another 224 MB/s boost at these frequencies as a result of the tightening of the timings. 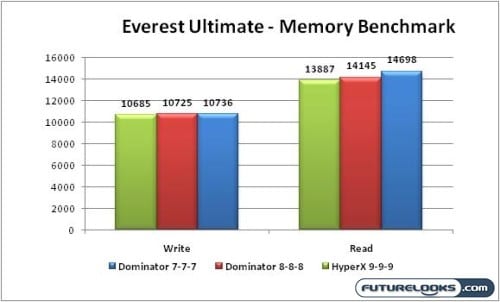 Everest tells a very different story.  The stock Dominator easily out performs the HyperX. It’s easily over 200 MB/s faster thanks to the already lower timings. The gap increases to 385 MB/s in favor of the Dominator using even tighter 7-7-7-21 timings.

Whatever the visible differences in SANDRA, Everest doesn’t produce similar results. Let’s keep with the benchmarks to see if the SANDRA results are just some unknown issue.

While 720p encoding might be enough for some, 1080p can seriously tax a system and also derives benefits from things like memory frequencies and timings, allowing the CPU bus to be saturated with data. If you’ve ever converted an HD movie, you’re well aware of how long it can take. 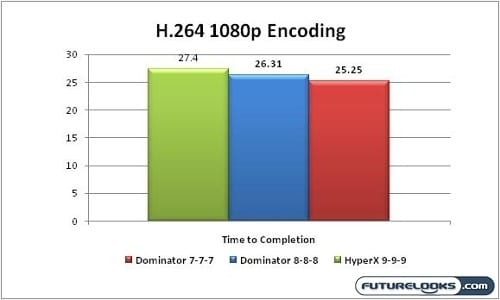 As you can see, there’s a noticeable difference in time to finish the conversion. This is a great indicator for reinforcing our recommendations for spending the extra cash to get the better quality memory with lower latencies, especially if you like your HD movies. Having said that, this also benefits any non linear editing software like Premiere Pro CS4. 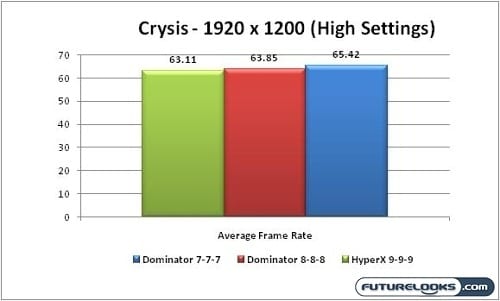 Frame rates are pretty comparable differing only by a couple frames at most. The Dominator’s lower latencies offer a little extra horse power even though the video card is doing the biggest amount of work. This also a good comparison for users who are contemplating spending too much for RAM they may not need for the purpose of gaming.

Since rendering is heavily dependent on processor and memory resources, it just seems fitting to give Cinebench a try. This should give us an idea of just how latencies affect CPU performance. 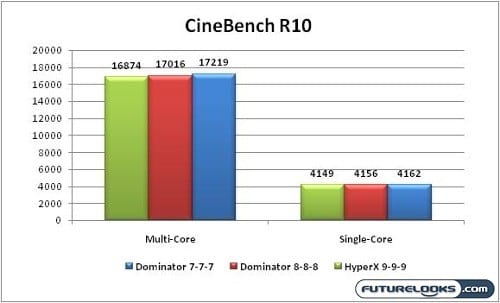 What’s interesting here is that while the single core operation saw only minimal performance gains, you can see the impact that latencies have when the processor’s HyperThreads go looking for resources. Remember, this is without Turbo or any Auto overclocking options enabled in the BIOS. You will definitely see a performance boost upwards of 18,000 when you do decide to enable those features on your own.