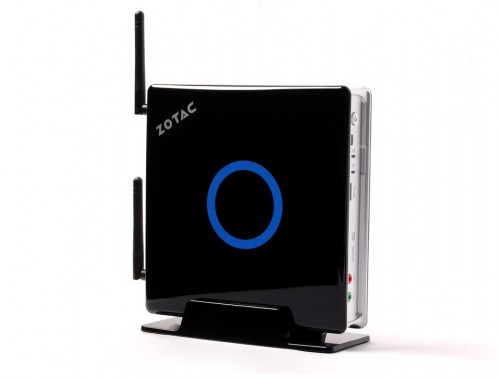 ZOTAC is one of the leading manufacturers of mini-PCs and continues to strive to get more power in every generation of product. This year they make a huge leap in performance for their Intel line with the new ZOTAC Zbox ID90.

The new ID90 features at its core an Intel i7 3770T desktop processor with HD 4000 graphics. This gives the Zbox ID90 4C/8T (four cores/eight threads) up to 3.7 GHz for some serious processing power. This would be great for only the fly digital encoding or multitasking. The HD 4000 graphics should also provide up to 2.5 times the graphical performance from previous generation’s HD 2500 IGP. But with Haswell already here, we find it curious that they would still continue to use the older Ivy Bridge parts.

Even though there is clearly a number of improvements over their previous products still, this should come at no additional cooling requirements. As always, you will have the option of a barebone system or the PLUS model which comes with 4 GB of DDR3 RAM and a 500 GB 2.5″ HDD.  Although the ZBox ID90 is still a great performer on Ivy Bridge, we have to wonder why they just don’t get out there with Haswell. Especially since all the hot products will soon be shipping with those parts onboard.

In ZOTAC’s defense, most mini-PCs typically ship with notebook CPUs, which aren’t as powerful as their desktop counterparts. Hopefully we’ll be surprised by the price point when they finally become available sometime later this year.

Jun. 3, 2013 – ZOTAC International, a global innovator and leading manufacturer of graphics cards, mainboards, mini-PCs and accessories, today doubles the ZBOX processing power with the very first quad-core ZBOX mini-PC. The new ZBOX ID90 series employs the power of an Intel Core i7 3770T with HD Graphics 4000 for a supercharged mini-PC computing experience with no compromises.

“ZOTAC has always seen the need for a quad-core mini-PC but the technology was not available to us previously. With our 3rd generation ZBOX platform and the range-topping Core i7 3770T, we put together the perfect solution for demanding multi-tasking users without sacrificing the small form factor with the ZOTAC ZBOX ID90 series,” says Carsten Berger, senior director. “The quad-core processor and extensive Virtualization instructions makes the ZBOX ID90 series a perfect solution for OS Virtualization too.”

It’s time to play with the ZOTAC ZBOX ID90 series.

PLUS models available with pre-installed memory and hard drive