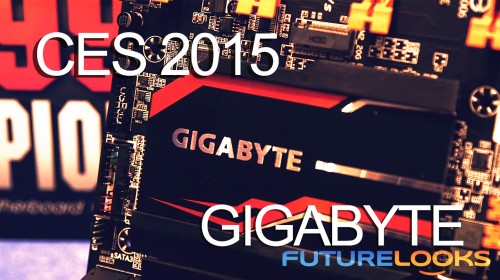 GIGABYTE continues to soldier on as the number one motherboard maker on occasion, with stiff competition from ASUS. And like ASUS, GIGABYTE has continued to branch out into different product categories. At CES 2015, we see their continued commitment to the PC enthusiasts and overclockers, but we also see great headway into product categories such at their BRIX mini PC systems, and their increasingly sexy, notebook line up, which includes their premium branded AORUS line up. Check out the video for all the goodies…

For those that want to skip around, check out the time codes below. If you have any problems watching the video, you can also view it on our YouTube Channel. (originally posted on Jan 15, 2015)

00:22 – GIGABYTE continues their commitment to the overclocking community, with the launch of their new X99 SOC Champion motherboard, which caters directly to that market. Unlike some of the full featured boards on the market, the SOC Champion trims down on components and features that can potentially impeded a world record. This includes simplified ports, audio, and memory slot configuration. The board, however, supports the most impressive array of overclocking options including DIP switches, voltage read points, and a BIOS tuned for the task. No word on pricing as of yet, but we expect an announcement with firm launch dates soon.

02:05 – The GIGABYTE Waterforce Triple SLI GPU system was original announced at COMPUTEX 2014, and raised a lot of eyebrows both for its power, and the tongue numbing price tag of $3000+ US. Apparently, people are buying them, so GIGABYTE unleashed the next version based on the GTX 980. Expect to pay $3000+ again, but you get a cool briefcase that it ships in. While it’s currently an exclusive to NewEgg, do expect more retailers to pick up the SKU in other regions soon.

03:42 – GIGABYTE continues to push their very popular BRIX series of PC mini systems. The new BRIX S systems now support the fifth generation Broadwell technology, and will come in Core i3, i5, and i7 editions, both in a “Pro” version, and a “Slim” version. The top end model we looked at supported all the bells and whistles including multiple storage (SSD and mSATA), NFC, plus room for two DIMM slots. They new machines will slot into current models place holders, and will be roughly the same price. They are due out in the coming weeks.

05:05 – At COMPUTEX 2014, our sister site, MEGATechNews, discovered that GIGABYTE had been hiding an entire high end gaming notebook division called AORUS. I guess the partnership with RAZER, helping to build their machines, rubbed off, as the machines from this division have a certain style that the regular GIGABYTE notebooks do not. The big fuss at CES 2015 was the addition of a new X5 model which sports a top end Core i7 CPU, SLI GTX 965M graphics, and up to three M.2 slots, with room for an additional SATA drive. The machine even supports up to 32GBs of memory. Configuration are still being finalized, but you can expect the machine to hit the market for around $2499 US in the coming weeks. While the company seems to have some great hardware, the AORUS name still doesn’t have the reputation that other makers have. Hopefully they can change that in 2015.

For more CES 2015 coverage, check it out right here.