Search
Home
Guides
Prev2 of 9Next

Our Challenge – The Entry Level Apple Mac Pro at $2999 US 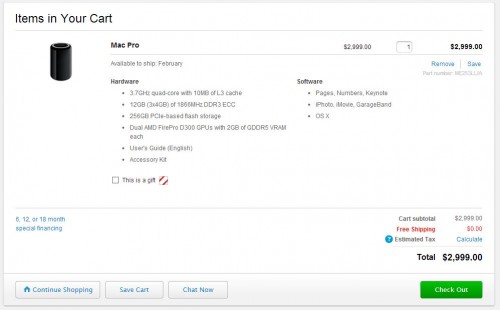 With its 3.7GHz quad core Xeon processor, 12GBs of ECC DDR3 memory, a 256GB PCI-e SSD, and dual AMD FirePro D300’s (W7000’ish), there’s a lot more we can do at this level than we could with the maxed out top spec Apple Mac Pro at $9600. For starters, we can decide to go with an LGA1150 socketed Xeon, or choose a single more powerful graphics card instead of two less expensive ones, to potentially save money, if we wanted to. There’s just a lot more we could do with the wide range of available DIY hardware when we aren’t already at the top of the spec.

But to remain true to what we set out to do in the other article, we’re going to try to get as close as we can with PC spec components that are available today, to the general PC DIY public. That means that OEM hardware is out of the questions because you would lose the longer warranties associated with retail components, which gives many PC DIY builds an advantage over pre-built systems from manufacturers. Plus, you and me aren’t buying 1000 pieces at a time so any pricing they would get, we would not get. However, traditionally, most PC DIY projects do end up often cheaper than having it built for us.

This time, we’re also going to ditch trying to go small, and just focus on matching spec. Even if it might cost us a few dollars more (but hopefully less). Let’s see what we can do here!