A few of these benchmarks you may recognize from our original Intel Core i7-5960X Haswell-E review. It’s important to include them as the X99 platform isn’t the right choice for mainly gaming simply due to the overall cost premium. Granted, Intel nor its partners are going to discourage buying the Extreme series processors or any high performance X99 motherboard. But, we as reviewers and regular consumers like yourselves, must point out that $700 to $900 will buy you a surprisingly capable quad Core i7 + Z97 system that will game for years.

That said, the Intel X99 chipset and its new processors, are truly meant for content creation, in particular, video editing/transcoding, audio encoding, rendering, and compiling projects. Or basically, any tasks that take advantage of more cores and more threads.

In order to get warmed up, here are some SLI Gaming benchmarks with Metro Last Light, Battlefield 4, Assassin’s Creed III, and Crysis 3. Intel Core i7-4790K – Z97 and Core i7-4770K – Z87 scores were included in some of the test results to give you an idea of comparative performance. We’ll then move on to more multi-threaded tests. 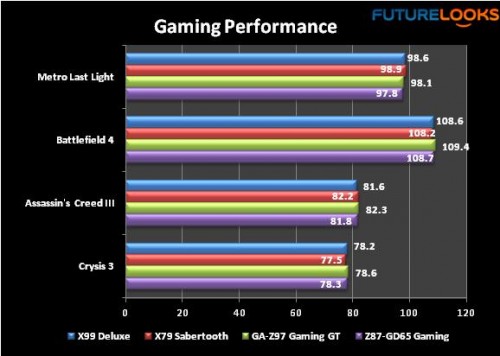 As you can see, Z97 and Z87 are still perfectly great gaming systems, especially in SLI. The SLI action is more than enough to handle maximum possible tessellation and game settings. Games loaded very quickly on X99 or Z97/Z87 systems thanks to M.2 SSD support onboard. 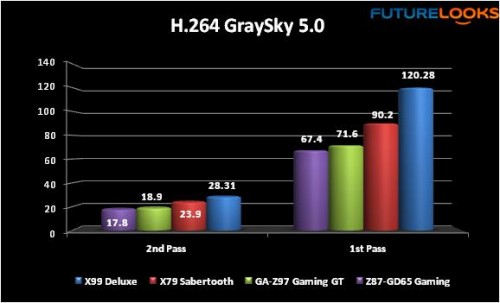 Here we see the X99 providing a stable platform for hours of transcoding with GraySky 5.0 benchmark. (It’s free to download, so have a go yourself.) Again, this is something you absolutely must have a stable board for or else you end up wasting hours of rendering time for a project. 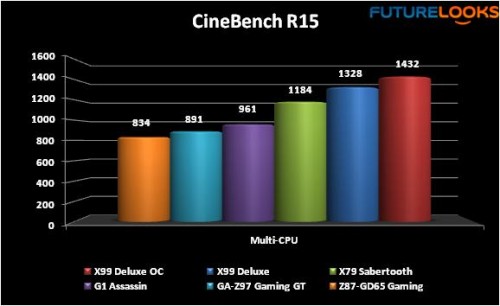 Rendering is a seemingly easy task for the Haswell-E processor. There are plenty of software titles similar to CineBench that require processor stability and can take advantage of multiple cores and threads. The X99 Deluxe did well all the way up to 4.6 GHz. And with 8 cores and 16 threads, it certainly chews up lesser cored/threaded processors. 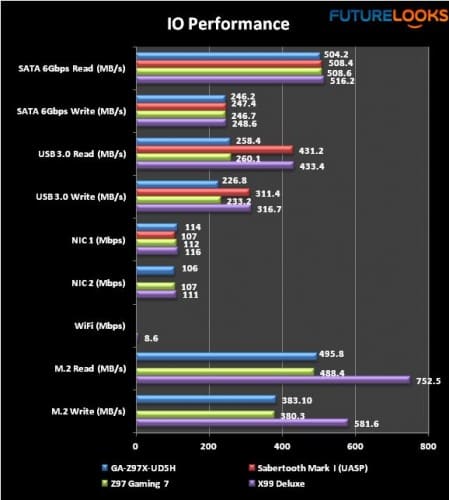 With M.2 PCIe, M.2 SATA, or just SATA Express being offered by partners, transfer rates and bandwidth have increased in Intel’s next generation platforms. You can see there’s a performance bonus to supporting M.2 x4 using the Plextor PX-G256M6e M.2 PCIE SSD.

Moving to LAN connectivity, the WAP is about 20 feet from the test bench to represent a typical distance. Make sure you have a decent dual band, or tri-antenna 802.11n or 802.11ac router to feed the integrated 802.11ac  WiFi controller. And, of course, ASUS’ USB 3.0 Boost continues to be a fast option over standard USB 3.0 performance.

Overall, everything checks out here with some impressive numbers, especially in multithreaded apps. And of course, the board offers quick connectivity. But what about audio performance on this $399 US board? Let’s dig into that next.