While the Signature Series will be ASUS’ bread and butter in the new Z170 motherboard market, it’s the Republic of Gamers boards that get us excited. ASUS has announced their Intel Skylake based RoG boards, and we are liking what we’re seeing. 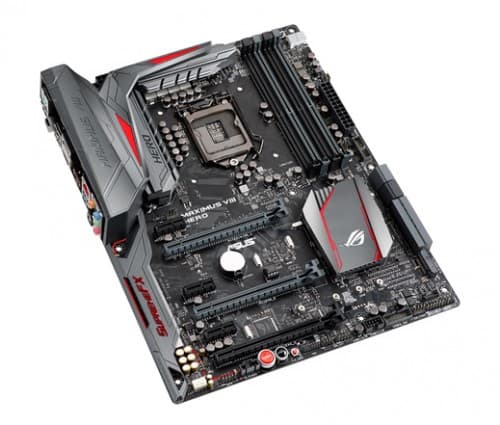 All three of these boards of course will feature the same engineering and attention to detail that is found in the ASUS RoG line. This includes some incredibly powerful overclocking tools, in the form of ASUS 5-Way Optimization. This software tool, combined with the layout of the motherboards themselves, allow you to make direct and immediate adjustments to the performance of your system. This includes the possibility of driving your DDR4 RAM to speeds over DDR4-3733MHz with all memory slots occupied.

The three boards will also include a number of top-end tech onboard, including SupremeFX 2015 and Sonic Studio II audio chipsets, and the latest Intel Gigabit Ethernet (i-219V) controller with LANGuard and GameFirst technology.

The new Z170 based Republic of Gamers motherboards are available now from ASUS authorized resellers. There’s a wealth of information to be found about these new RoG boards in the press release below.

The new ROG motherboards provide the best gaming audio, gaming networking, and auto-overclocking performance, among other class-leading features. With refined design choices and premium components for maximum durability and stability, the Maximus VIII motherboards represent the perfection of function and form for gaming and enthusiasts alike.

ASUS 5-Way Optimization offers class-leading Auto-Tuning performance
Tuning a new system for the best overall performance can be a daunting task for newcomers to PC DIY. To make the process easier, most motherboards offer basic overclocking profiles that apply predetermined values. However, the overclocking ability of the platform can vary widely, so there is a downside to using preset overclocking profiles—the parameters applied may not make the best use of the chosen CPU, cooling, or memory modules.

Best fan controls available—period!
For the ultimate in cooling and quiet operation, the Maximus VIII Hero, Maximus VIII Ranger, and Maximus VIII Gene all feature advanced fan controls coupled to onboard thermal sensors and hardware-level 4-pin/3-pin PWM/DC modes for every header. Each chassis fan header can be assigned to react to different temperature diodes for optimal cooling. A dedicated water pump header is also onboard; it’s set to run at full speed by default to prevent spin-up issues. The water pump header is fully controllable, supporting both PWM and DC pumps. Every onboard header can be controlled easily via Fan Xpert 3 software or via the intuitive interface of the ASUS UEFI.

If that’s not enough, an onboard header is compatible with the ASUS Fan Extension card** (sold separately), which lets users plug in and control three additional system fans in PWM or DC mode. This card has headers for additional temperature probes, too. Simply put, the cooling controls on ASUS ROG’s Z170 motherboards put competing motherboards and dedicated fan controllers to shame!

For users who multi-task with their systems, GameFirst technology can be used to prioritize game-related packets or allocate bandwidth to specific applications to eliminate lag, streaming stutters, and file-sharing slowdowns—ensuring a perfect experience. Users need only choose the Optimization, Game, Media Streaming, or File Sharing preset to prioritize a given aspect of network performance.

ROG’s latest gaming motherboards also have built-in DRAM Over-current Protection with an additional resettable fuse to protect DRAM against over-current damage, dual backplates to provide reinforcement, and a black nickel-coated Q-Shield for protection from nicks and cuts while building your ultimate gaming machine.

To boost storage performance, RAMCache technology effectively caches your favorite games and apps launch so they launch at breakneck speeds. RAMCache turns milliseconds into microseconds to boost game-load times, and it minimizes the risk of data loss compared to traditional RAM drives.

ROG’s much-loved free keyboard upgrade has also been upgraded to KeyBot II, an exclusive microprocessor controlled by a simple user interface that lets gamers record macros directly from the keyboard, switch profiles in seconds, enable special functions with hotkeys from F1-F10, and start and even boost the PC from shutdown (S5 mode). The brand-new Directional Exchange feature allows fighting-game fans to switch directions at the touch of a button.

The Maximus VIII Hero, Maximus VIII Ranger, and Maximus VIII Gene are also able to stay in the game with free access to Overwolf, a clever, unobtrusive overlay that enables browsing, emailing, instant messaging, streaming, or recording without interrupting gameplay. This brilliant helper is all dressed up in color-matched ROG skins to illustrate membership of an elite pack—soon to be available from Overwolf’s app store.

1 Specifications, content and product availability are all subject to change without notice and may differ from country to country. Actual performance may vary depending on applications, usage, environment and other factors.