Overall, I’m very impressed with what ASUS has done with the Eee PC 1000HA. They’ve taken all of the feedback that people have given about previous models (as well as some competitors) and addressed many of the issues. The build quality is absolutely amazing. The hinge is very solid and the frame has minimal flex. It’s also interesting that the battery makes up a portion of the rounded section, further adding to the streamlined appearance of this netbook. 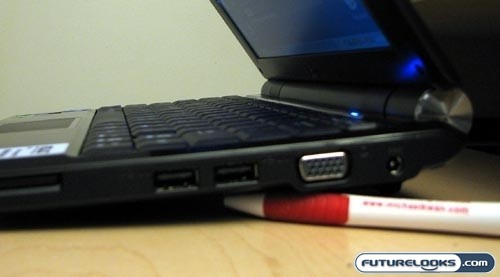 Perhaps the single greatest design element on the Eee PC 1000HA is that it is naturally propped up in the back. As you can see in the picture above, this creates an “air pocket” underneath the laptop and this aids significantly in keeping it cool under high performance.

While I had some issues with subjective overheating on the MSI Wind, I did not experience the same issue with the Eee PC when using it on a table. When I had the netbook on my lap, however, the vents on the bottom got slightly obscured and the Eee PC starting to get a little warmer. It never got quite as hot as the Wind, though, and it was no warmer than most other laptops. 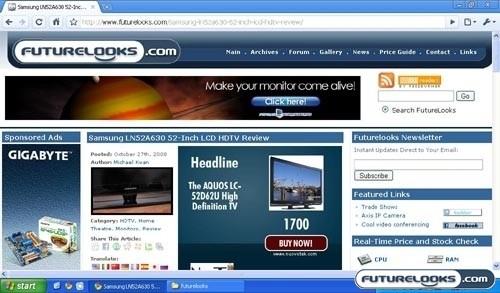 Like all of the other 10-inch subnotebooks on the market, the Eee PC 1000HA features a WSVGA display. This a quantum improvement over the old WVGA displays on the older Eee PCs, because now websites can actually render properly and you’ve actually got enough room to view most standard programs.

It can be a tight fit for some websites — FutureLooks.com just fits — but having 1024 pixels across is enough for most needs. Image quality is adequate and you shouldn’t have too much trouble watching a few web videos or running simple applications. I also appreciate that it is a matte display and not a glossy one, as this helps to minimize the glare.

I am very pleased that Asus decided to ship this netbook with a real six-cell battery. You may be able to find some competitors selling seemingly similar netbooks for a lower price, but many of those ship with three-cell batteries. The MSI Wind (with a three-cell battery) topped out at about 2.5 hours of regular use on a single charge, but I was able to achieve over five hours on the Eee under the same conditions. The Eee PC also comes with a built-in performance manager, so it can dynamically move between battery-conserving and high-performance modes to maximize both your usability and battery life. That’s using “Smart Mode.” You can also manually adjust those settings. 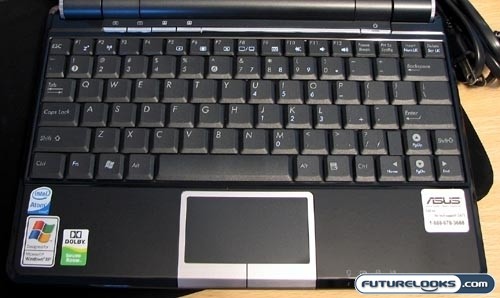 The keyboard is a good size. It is certainly smaller than the keyboard you’ll find on larger laptops, but it is perfectly usable and it shouldn’t take you long to acclimate. Unfortunately, there is one rather glaring problem and it’s almost enough to be a deal breaker. Note the placement of the right shift key. Why, on Earth, is it placed so far to the right? My poor pinky doesn’t stretch that far. I found myself either hitting up the “up” arrow or the empty space between the up arrow and the forward-slash button when I really wanted to hit shift. This is really annoying and it doesn’t only affect the Eee PC, but other smaller laptops in the ASUS family, namely the U1F. I’m sorry, but that really has to change.