Ah, the release of a new GPU series. It’s the most wonderful time of the year. AMD has unleashed the R9 3 series GPU line on the masses, and our friends at ASUS have announced their initial product line. They aren’t just focusing on the halo chipset either. Instead ASUS is announcing cards featuring the R9 390X, R9 390, R9 380 and R7 370 GPUs, to be added to their STRIX gaming line. 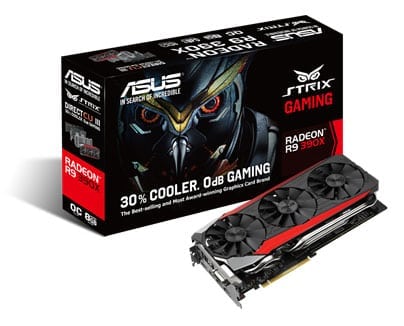 That isn’t to say ASUS isn’t saving the top tier of their technologies for the top tier cards. Of this new line the STRIX R9 390X and R9 390 will be the cards cooled by DirectCU III, with a patented triple wing-blade fan design and ASUS Auto-Extreme technology with Super Alloy Power II components. The STRIX R9 380 and R7 370 will use DirectCU II cooling technology instead, with a dual wing-blade design and copper direct contact heatpipes. Both these technologies, ASUS claims, will make for a extremely quiet gaming card.

The extra tough cooling is going to be quite helpful when you decide to utilize the overclocking tools ASUS has included with these cards. GPU Tweak II is a new version of their GUI-based OC tool, and will allow you to overclock your card with the click of a single button. Seasoned overclockers won’t be left as an afterthought though, as the tool will include all you need to wring the most out of your card.

These cards should be available now from your favourite PC parts retailer. You can check out the press release below for more info.

Premium quality and reliability: Auto-Extreme technology with Super Alloy Power II components
The Strix R9 390X, R9 390, R9 380 and R7 370 benefit from ASUS-exclusive Auto-Extreme technology* , the industry’s first 100%-automated manufacturing process that removes human fallibility from the production line for consistent perfection — making them ultra-reliable in all scenarios, from general use to hardcore gaming and overclocking. Auto-Extreme technology eliminates flux to minimize dust buildup and oxidization, while the rear of the printed-circuit boards are totally smooth, for easy handling. This new manufacturing process is also environmentally friendly, eliminating the need for harsh chemicals and reducing production power consumption by 50%.