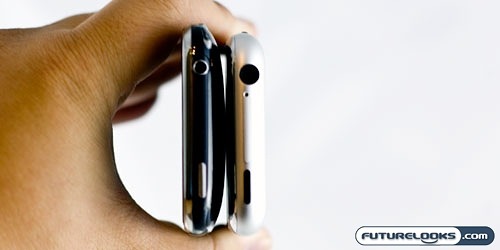 The design and dimensions of the iPhone remain largely the same although a few notable changes have been made.  Most significantly, the matte metal back plate has been replaced with a rounder, plastic back plate. This plate alows the iPod to arrive to you in either black or white.  Which you’ll like better is probably a matter of preference, however, my impeccable fashion sense pointed me towards black because it’s a fashion rule that black goes with everything. 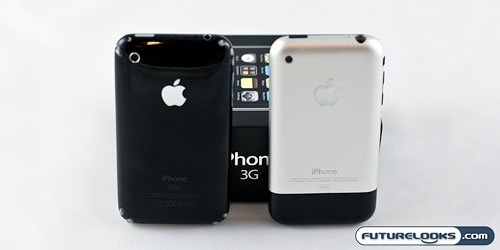 Personally, I liked the metal back better as it was less likely to scratch and also flatter so it doesn’t move around when you’re poking around on your phone as it sits on a tabletop.  The new back is also much more of a fingerprint magnet so putting on one of the many available clear skins is probably a good idea. Not only will it protect the unit, but also make fingerprints easier to get off. 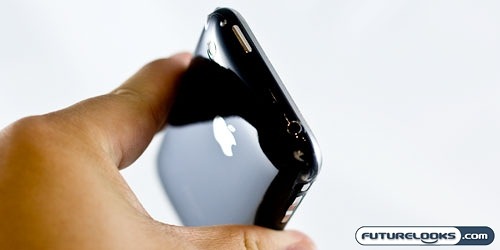 The more welcome change is the fact the headphone jack is no longer recessed, which was one of the most ridiculous elements of the first iPhone as it required all sorts of weird third party adapters in order for you to use real headphones. I guess public outcry was enough for Steve Jobs to annouce the non-recesssed jack as a feature when the 3G was introduced earlier this year. 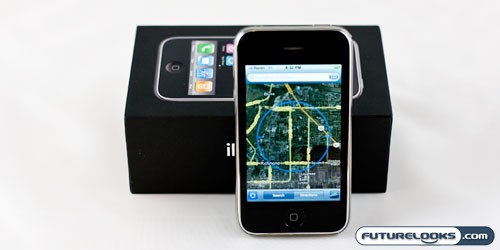 The assisted GPS is one of the new features of the 3G iPhone.  While the first generation included searchable Google Maps support along with a “Where Am I” feature that triangulates the user’s general location through a combination of Wi-Fi and cell towers. The 3G also includes true GPS to give users a near pinpoint location fix.  However, it lacks turn-by-turn directions which limits its usefulness in making trips by car. Rumor has it that it might be included in a future firmware update or through third party developers.

A nice bonus from the GPS chipset is that photos taken with the built-in camera are automatically geotagged. Even better, they don’t destroy your photos like this product. If Apple can include this feature in a phone, I’m sure Canon, Nikon, and the rest of the gang won’t be far behind in including this feature in all cameras.

While the A-GPS in the iPhone suffers from the usual setbacks most GPS devices experience such as the inability to lock on in or amongst tall buildings, underground and in heavy cloud cover, it does work reasonably fast and accurately when conditions are ideal.  The iPhone will usually acquire your location in less than a minute.  It may put you on the wrong side of the road but in most cases, it puts you fairly close to where you actually are.  I’ve only experienced one instance where it was just completely wrong and thought I was in the middle of a river.

Just how much of an improvement did we get when Apple decided to include 3G in the second generation iPhone?  I loaded three different websites on both the first gen and second gen iPhones, both with cleared caches and with five bars of reception.

Of course, depending on where you live, your results may vary.  In reality, the specific numbers don’t really matter but the overall result is that the 3G is significantly faster than EDGE, significant enough that EDGE users may want to upgrade.  The boost in speed makes it far less torturous for surfing and those high data plan rates suddenly become a bit of a better value as you don’t have to wait forever for pages to load.  We all know waiting sucks. 3G makes the iPhone a more enjoyable device overall.  It also allows for certain apps that require high speed data rates to operated properly. These include things like streaming music programs like last.fm and Flycast.