Razer has always used interesting names for their gaming peripherals. We’ve even reviewed a few of them. However the name for their latest gaming mouse, when pronounced, sounds more like a wonderful South Asian treat then a high performance pointing device. Still the Razer Salmosa represents an easy entry into the gaming peripheral market for those who want something that performs better then the $10 mouse that came with their system. 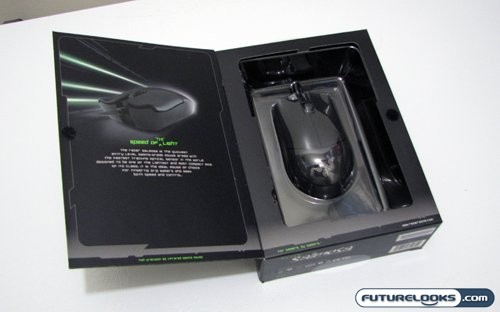 The Razer Salmosa is an entry level gaming mouse that tries to bring all the great things about Razer’s mice to those folks who are on a tight budget. This latest mouse features Razer’s 3G infrared sensor, which has by default a resolution of 1800dpi. This is adjustable via both software are hardware to three separate settings. It also has adjustable polling times. All this is packaged into an amdextrious design that should suit both righties and lefties. For more product specs check out the product home page.

When it comes to gaming peripherals, pricing can be a contentious subject. Both keyboards and mice that are marketed as “gaming” devices can run $60 USD or more. At the risk of sounding like Ron Popiel in an infomercial, I have to say that you won’t be paying that for the Razer Salmosa. Razer has priced this mouse at a very competitive $39.99 USD. This makes it the gaming mouse for those penny pinching gamers. 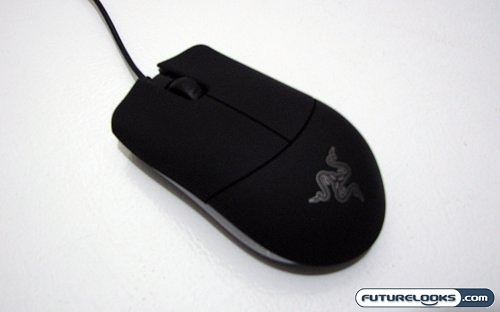 The mouse itself doesn’t look like much. It appears to be a standard 3-button mouse, with looks similar to something old school from Microsoft’s bag of goodies. That’s where the similarities end. First the Salmosa is smaller than most gaming mice, and the buttons are contoured and textured to fit well into your hand. Instead of being a solid brick like the Microsoft Optical Wheel Mouse, which it most closely resembles, the Razer Salmosa is recessed inwards to better fit you hand. 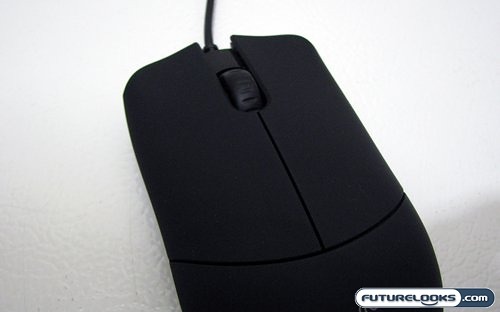 Another deceptively simple aspect of the Razer Salmosa Gaming Mouse is the button configuration. While they may look like any other simple 3-button configuration, they are actually completely reprogrammable to any number of functions through the included software. As for the scroll wheel, it offers more resistance when scrolling then most common “clicky” scroll wheels. This would in theory allow you to pick your weapon of choice easily, without accidentally scrolling to the next one. It’s also fully customizable in terms of speed. 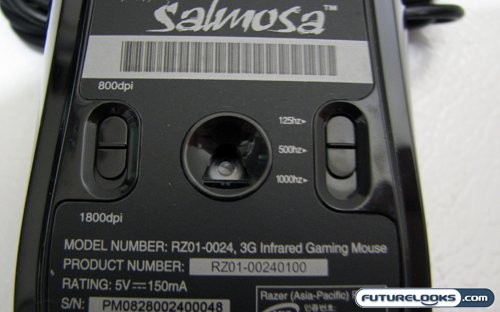 Flipping over the Salmosa reveals where you make adjustments to both dpi resolution and polling frequency. Though it’s nice to have the ability to tweak both of these settings, the position of the switches may be inconvenient for some types of games. I can’t see myself being encouraged to flip my mouse over in the middle of a fire fight in my favourite 3D shooters. I’d imagine RTS gamers might have an easier time of it, but I’ll have to reserve judgement until we get to actual testing.