In order to test out the DF-85’s prowess as a competent enclosure we’ve assembled some of the hottest and loudest components available. Why? Because, it tells us how well an enclosure can manage a worst case scenario. Pun intended. Here’s what our permanent case testing system looks like:

Our operating system of choice is of course Windows 7 Ultimate Edition 64 bit. In order to ensure optimum operations all the latest BIOS and drivers were used as of the launch of this article.

To measure thermal performance we used four sensors connected to a Zalman ZM-CMF1 Fan Controller. We’ll be updating this to the NZXT Sentry LXE in a future case review. You can check out an unboxing of that unit on our YouTube Channel. To measure noise, an IEC sound meter was used. We’ll go into specific placements in the test sections.

Installation was quick. Compared to the original Antec Twelve Hundred, even simpler due to the lack of necessary hardware assembly. I especially found the Fleet Swap 2.5″ and 3.5″ docking ports to be very handy and I also confirmed the top 2.5″ drive bay docking station worked using an OCZ Agility SSD. Windows quickly found the device and access was permitted. While the 2.5″ bay works, it’s not exactly a common place thing to have small drives lying around. However, the two Fleet Swap internal bays were quite handy for connecting the Seagate SATA test drive.

One thing that did concern me were the front 5.25″ drive bay doors. They’re not solid doors and flex a bit. Like any bezel door, they probably won’t withstand too much direct abuse. Just make sure you unlock the front bezel via the internal sliding lock first. 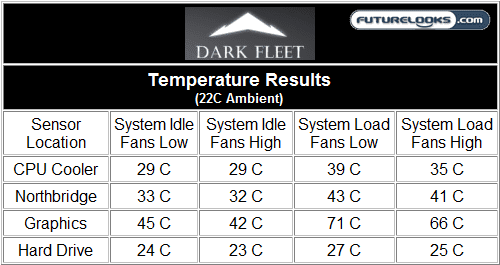 Based on the results the case manages the insanely hot system just fine. What was interesting is that the system cooled better by a degree or two when leaving the top fans on low at all times. Typically air rises, but this enclosure managed temperatures better with front to back air flow.

I usually like to see how much noise a case can block. Keep in mind, some cases are meant to block noise like Antec’s Performance Series and some are designed for gamers who typically don’t care. This is more gamer based, so keep that in mind while checking out the results below.

As you can see, our loud test system resonates like mad at all times. In fact, I could hear the CPU fan over the video card fan at all times. The case naturally blocks some noise, but given all the extra venting, it doesn’t block a lot. This is to be expected of cases intended for gamers and enthusiasts. Closing off the top fan ports entirely helped cut back on a lot of noise so there is potential to reduce noise. 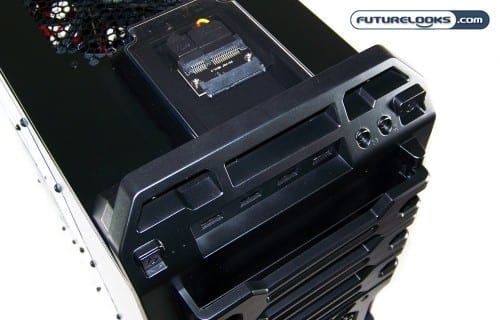 What separates a case from the rest of the pack is by doing more than just including a few bezel lights, mesh grills, or changing the placement of the front panel ports. It helps to start with some shock and awe and in a sense Antec has done that because the DF-85 is so unlike any other case they’ve created. What we get is some of Antec’s impressive quality and sprinkled with innovative functionality along with some futuristic creativity.

The DF-85 full tower case offers an impressive array of innovative refinements from water cooling access, expansion, chassis function, and thermal performance. Users will definitely enjoy the level of thermal control accompanied by the latest ship in the fleet. Most importantly, it’s something different for Antec fans to enjoy.

Even with all the many extra features, Antec managed to keep the DF-85 price tag down to $189.99US or less. While not a great value, it’s definitely a solid offering. And while the red and black motif has been done to death, it’s still different enough to deliver a fresh experience. More pics after the jump!