This time we will be looking at two DX11 titles. The difference here will the time frame in which these gamers were compiled with Battlefield 3 being designed for modern graphics cards and a modern processor. While Metro 2033 is an older title well known for being extremely taxing on graphics cards. 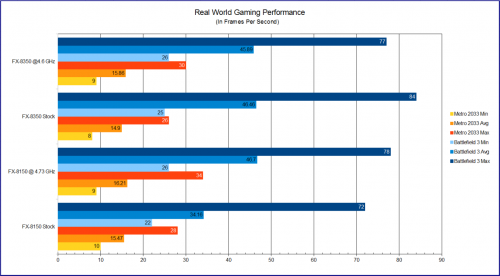 Performance for the older Metro 2033 is virtually the same. The fluctuation in results can be attributed to differences in my gameplay though I tried to trace my steps as best as I could with each test. Battlefield 3 was a different story.

The FX-8350 clearly came out ahead by a 12 FPS average and on max FPS as well. The FX-8150 Zambezi at 4.7 GHz did manage to match the FX-8350 Vishera’s stock performance. I believe this was close to my HD 6850’s performance limit as overclocking the FX-8350 resulted in similar performance at higher clocks speeds.

Lets take a good look at just the performance of the CPU itself to see if the results we have so far are just a fluke. This should clearly show if there was improvement in CPU performance with raw calculation performance. I will be including the Phenom II 1100T results for comparision only. This should allow us to weigh in on the past single-thread performance concerns with the Zambezi CPUs. 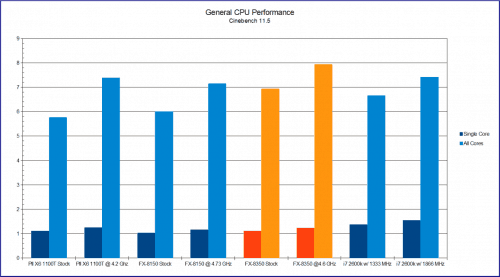 There is some good news and bad news. The Vishera FX-8350 matches single threaded performance of the Phenom II 1100T at 1.11. It is a good sign as the FX-8350 can claim its place as the undisputed champion amongst AMD processors. On the down side, it still falls behind the i7 2600k in single-threaded performance. However, the new Vishera is still much cheaper than the top end INTEL Sandy Bridge parts and even further away in price from the Ivy Bridge parts.

Now lets use more task specific tests to see if the FX-8350 has any weaknesses. The arithmetic tests will show how well Vishera handles Integer math in three different environments. 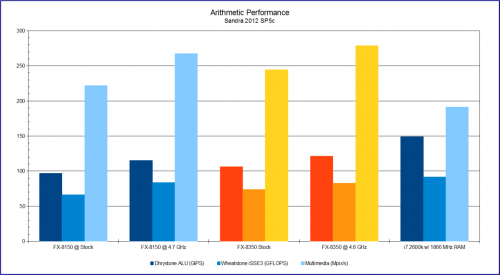 This is where the Zambezi chip is capable of giving some decent competition in the field. The FX-8150 even gets a win with a 1.11 advantage when both processors are overclocked. In every other test the FX-8350 takes the lead though not in any sort of spectacular fashion.

Next up will be testing where we can see if enhanced instruction sets can make a huge difference. We have to point out that the AES extension make the AES-256 testing unfair when compared to chips that do not support it.  On the other hand, the first Bulldozer chips showed a loss in SHA-256 performance which turned out to be a coding issue with Sandra. This has long since been corrected and now shows more accurate results. 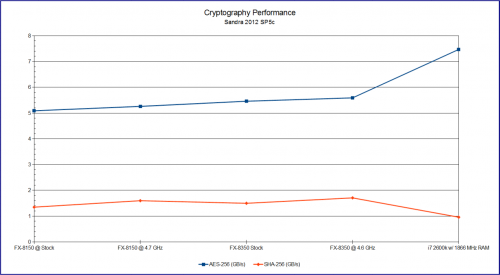 Once again the FX-8350 definitively pull ahead of its predecessor. Even when overclocked to 4.7 GHz, the Zambezi FX-8150 is struggling to compete with the FX-8350 at stock speeds. The Intel i7 2600k takes a firm victory in AES-256, but falls well behind in the SHA-256 testing.

Concluding our performance tests with SANDRA 2012 is the memory performance test. This has been an area that AMD has been playing catch up to Intel for a number of years. The Bulldozer sports a new memory controller from AMD that was original seen on the first APUs. Lets see if there is any additional performance improvement there. Results from an INTEL Core  i7 2600k will also be included for comparison. 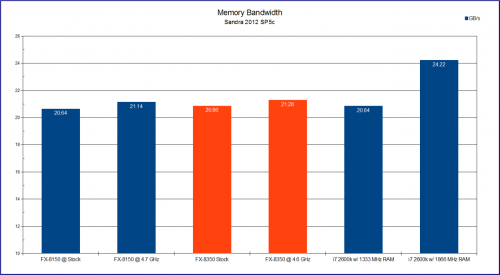 There is unfortunately no major improvement with memory bandwidth over the Bulldozer. This means there is still a 16.6% advantage for the i7 2600k at the same clock speed. This was expected as the memory controller was not listed as being changed or enhanced by AMD in any way.