It is in your best interest to keep up to date with your operating system, since those patches can fix up any security issues or performance problems you may be experiencing. The way that this has typically be done is that your computer hooks up with the official servers, grabs the files, and proceeds to patch up your OS. If these leaks are to be believed, then the way that the Windows 10 update system works will be utterly different.

The assumption is that you can still download the patches directly from Microsoft’s servers, but your next Windows 10 update may instead be offered through a peer-to-peer network instead. Yup, it’s like BitTorrent, but for security patches! The leak was first discovered by The Verge, which seems to provide you a few different options for how to get a Windows 10 update. If you flip the first switch, then you can “download apps and OS updates from multiple sources to get them more quickly.” 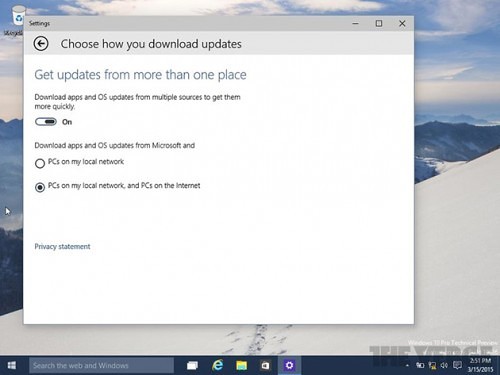 Underneath that, you’ll notice that you have one of two choices. You can either download those apps and updates only through PCs in your local network or you can opt to get them from “PCs on the Internet” too. The first is great for a multi-PC environment, like that of a company office, since it means that you can effectively download the patch once from the web and have it filter through to all the machines, rather than having each one of them hog up unnecessary bandwidth to download the exact same thing.

It’s a neat idea, but it’s also quite possible that it’ll also never see the light of day. If it does, you’d hope that Microsoft has enough security measures in place to ensure that you don’t “accidentally” download a rogue Windows 10 update that isn’t official.