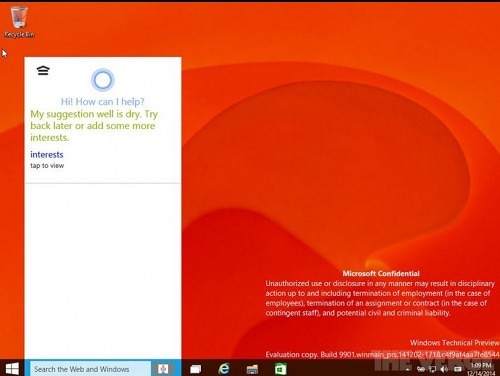 We already know that, for some reason or another, Microsoft is skipping Windows 9 altogether and jumping straight over to Windows 10. Our very own hardware editor Eric Garay has taken the Windows 10 Technical Preview out for a test drive, outlining what he liked and didn’t like about the initial build. Now, the newest version of Windows 10 (build 9901) has leaked onto the Internet, revealing a couple of the newest features in action.

The most notable is the integration of Cortana, the digital voice assistant from the Windows Phone line that is similar in scope to Siri on iOS and Google Now on Android. With Windows 10 build 9901, it appears that Cortana is built right into the main taskbar at the bottom of the screen, right next to the Windows Start button. Cortana for Windows 10, as is the case with its Windows Phone counterpart, should respond to both voice and text commands.

This isn’t just for searching the web or searching through the contents of your hard drive, as Cortana can also be used to set reminders and perform a slew of other functions, the list of which will surely continue to grow as Microsoft gets Windows 10 that much closer to launch. 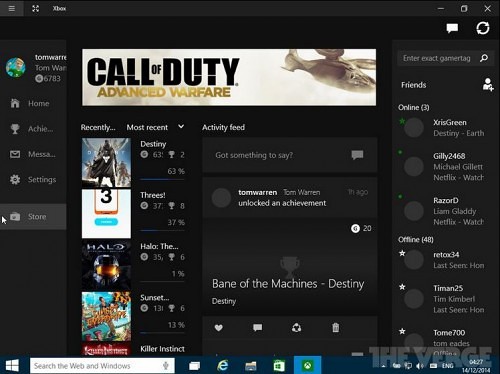 The leak of build 9901 also shows off the new Xbox app. This should tap into the same Xbox profile that you’re already using and the app will work as a gateway into the Xbox ecosystem. You can view your achievements, chat with your friends, view those activity lists and, of course, buy all your digital content via the Store. While there’s no SmartGlass yet support yet, that’ll likely get added in the future.

Other notable changes with this newest version of Windows 10 is the removal of the settings button from the Charms Bar and the progressive move toward eliminating the traditional Control Panel in favor of a more robust settings app with a control panel kind of feel.

Embedded below is an in-depth video walkthrough of Windows 10 build 9901 by WinBeta. With over a million people testing Windows 10, Microsoft has received no shortage of feedback.