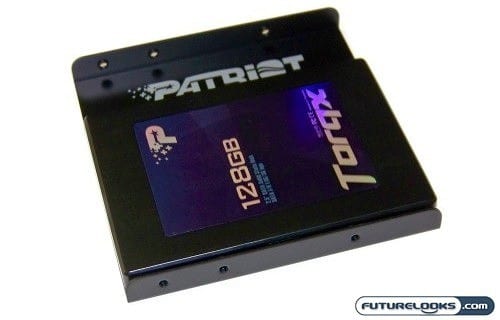 The TorqX SSD is housed in the safest color chassis of choice: Black goes with everything after all. They’ll also look neat and tidy as you start to stack them into a massive array of SSD goodness.

As with almost all SSDs, the TorqX is considerably smaller and also much lighter than a conventional hard drive. It really is amazing the amount of weight you can shed from your computer case by using an SSD. Where four heavier 3 pound drives that made up your RAID Array once sat, only two of the drive bays are now taken up. Your system is now at least twelve pounds lighter and potentially faster. As 512GB SSD capacities arrive, you’ll definitely start to find more of these inside LAN Party machines.

In order to create a worthy environment in which to test this high performance drive, we’ve assembled a system using the following hardware components.

For comparison purposes, we will be comparing the TorqX 128GB SSD against the recently reviewed budget/entry level Kingston SSDNow V-Series 128GB SSD drive and a Seagate Barracuda 7200.11 500GB SATAII 7200 RPM Drive. Our operating system of choice was Windows Vista 64 bit and all latest BIOS, firmware and drivers where installed prior to testing. 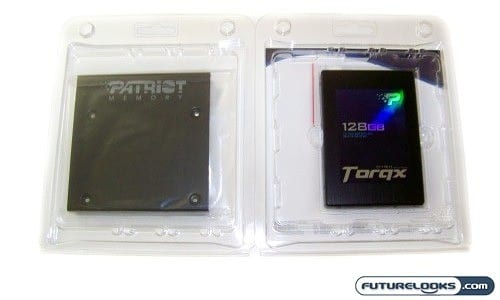 As mentioned earlier, Patriot Memory gives us a nicely made 2.5 inch to 3.5 inch drive adapter that is painted black and emblazoned with their logo. This is far more attractive that the boring bare metal rails that accompany some drives and far easier to install. However, it was kind of odd that the adapter doesn’t center the drive, but where else would they put the Patriot logo?

The process goes pretty much the same as any other hard drive installation, although you do notice that things go quite a bit faster once you start loading the OS. The only word of caution is in regards to defragmenting your drive: Don’t! This can lower the lifespan of your very expensive Solid State Disk. Windows, especially Vista and 7, have options to individually set which drives should be defragmented. Simply uncheck the SSD drive and apply the settings.

Testing the Torque of the TorqX

One thing that can present a challenge when benchmarking storage devices whether a regular or SSD, is that there isn’t really any kind of set standard. There are plenty of programs that will benchmark your hard drive(s) using different internal testing methods. For that reason we chose benchmarks which include SiSOFT SANDRA, ATTO Disk Benchmark, and Intech Software’s QuickBench. Each benchmark allows us to look for specific things to give us a better understanding of how a drive performs overall. You’ll be seeing these benchmarks a lot as we start cranking through more drive reviews in the near future.

If you’re not familiar with SANDRA, it’s one of the most comprehensive software benchmarking solutions available that can tell you everything you want to know about your system as well as test it. The reason I’m including SANDRA is because SISOFT offers a “Lite” version that you can download and use if you’d like to compare your own system’s Physical Drive performance to others. 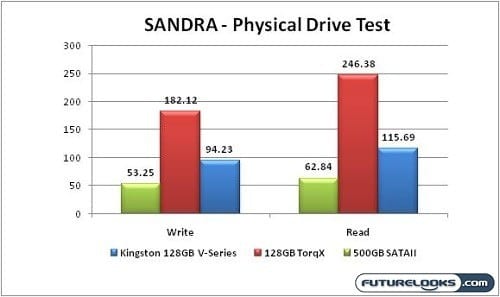 It will come as no shock to you that both SSDs more than doubled or tripled the performance of the SATA II drive. It would take a RAID configuration or a 10,000 RPM hard drive like the Western Digital Velociraptor to match the performance of the entry level 128GB V-Series. The 128GB TorqX is just a superb performer rounding out a very strong 182 MB/s write speed which pretty much made my Seagate Barracuda seem like it wasn’t doing anything.