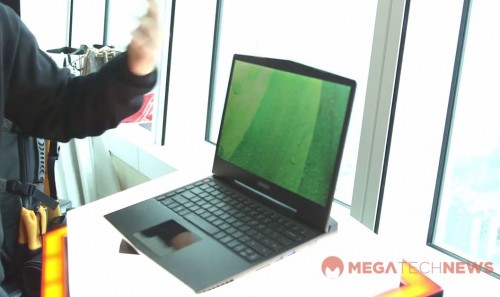 COMPUTEX Taipei is such a massive show, spanning several exhibition halls and countless private hotel suites. While we were up in Taipei 101 checking out the latest happenings from the GIGABYTE motherboard lineup, we also had a chance to see what they were doing on the notebook side. This included the core GIGABYTE brand as well as a newer development called AORUS.

The relationship between GIGABYTE and AORUS can be best described as “complicated.” On the one hand, AORUS is trying to operate as a mostly independent brand, carving out its own niche in the marketplace. On the other hand, it’s really a subsidiary of GIGABYTE and it is at the mercy of the mother company. That being said, the creative vision of AORUS is different. It’s meant to be more hardcore, more edgy, and more gamer-centric.

In the video below, we take a closer look at the AORUS X7 and X3 Plus, two of their main gaming notebooks. They boast some really impressive specs in really sleek bodies. We have reason to believe that GIGABYTE is the OEM for the RAZER Blade, so it’s possible that they are leveraging that experience and expertise with the development of the AORUS product line.

Getting beyond the newer AORUS brand, we also learned that GIGABYTE updated several of its laptops with several notable upgrades. They haven’t really touched the chassis on the GIGABYTE P34, P35 and P25, but they have beefed up the internals to give you more power and more speed.

Depending on the model, you get upgrades to the NVIDIA GeForce GTX 860M, 870M or even 880M graphics, as well as mSATA SSDs for speed and 4th-generation Intel Core i7 processors. The hot-swappable slot in the front of the GIGABYTE P35 is pretty sweet too, as it makes it easy for you to slide in an extra hard drive or even a Blu-ray drive if you want. That’s all covered in this video below.