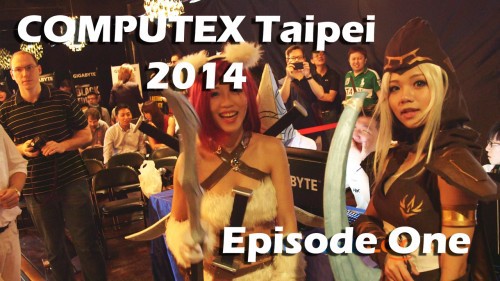 Team Futurelooks had an extremely hectic week in Taipei, Taiwan last week, as we covered one of the biggest computer shows on the planet: COMPUTEX 2014. First, we went on a tour of In Win’s factory, where we had a chance to give you an exclusive sneak peek at their new D-Frame Mini, then our news team at home, went nuts, pumping out all the news leading up to the show. Now, we’ve returned with FIVE full episodes of coverage, and we’re rolling out our first episode featuring be quiet!, GIGABYTE, Thermaltake, Rosewill and CORSAIR.

Sit back, grab your favourite beverage, snacks, and enjoy 28 minutes of Episode #1 of 5 of our COMPUTEX 2014 coverage in glorious HD!

00:35 – be quiet! gives us an update on their first year in the North American market, including some of their plans for expansion, so you can get your German engineered products faster. We also get a quick tease on a new product category that the German company will be entering into by the end of the year.

01:34 – We check in with GIGABYTE Technology to see what they have going on for the show. In our interview with Colin Brix, we find out a bit more about their plans to simplify their motherboard line ups, attract more mainstream gamers, and highlight some of the benefits of their overclocking activities. We also get a look at their new memory overclocking board that has broken records in its debut at COMPUTEX 2014.

06:22 – Thermaltake gives us the low down on a whole slew of new products including updates to their Core Series of cases, which now includes a mini-ITX cube. We also get updates on their Alpha Stage water cooling initiative, which sees a complete re-imagining towards a more enthusiast level audience. We also get a sneak peek at a new radiator design, that will necessitate the creation of a new case series.

12:39 – Rosewill has a number of new cases including an absolutely massive one called the B2 Spirit, which makes ATX boards look like mini-ITX boards. We also get a look at two new smaller form factor cases that take on a whole new level of build quality for the traditional value based company. We also get a look at their new Quark series of 80PLUS Platinum power supplies, and see their first digital power supplies from their new AIM series, get their official debut.

20:30 – CORSAIR commands the last segment of our video with a look at a trio of new cases that should have many of you drooling. Their new 380T series should please LAN gamers thanks to its “cat carrier like” portability, while their new 780T should please full tower users. We also get a look at the baby version of the Air 540 series chassis, called the Air 240, which is built for a mATX or mITX build. We also get an update on their new HX series power supplies.

Episode #2 is already being edited, so make sure you stay glued to our YouTube, Facebook, and Twitter channels, to be updated immediately on its appearance. It promises to be even more packed with goodness. If you’re looking for more news from COMPUTEX 2014, make sure you check out our news archives, where we’ve been keeping up on all the announcements.