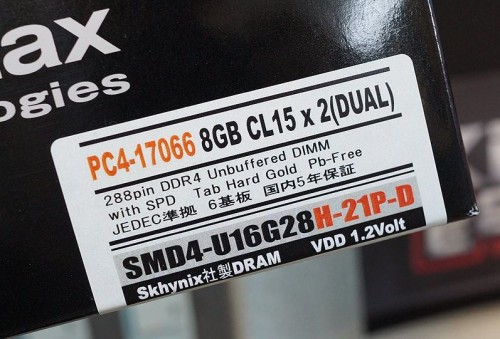 Intel’s X99 platform is headed for imminent release this September, and we’ll see it in action at the Intel Developer Forum (IDF). And throughout the early part of this year (see our CES 2014 coverage Episode #1 / Episode #2) and most recently, at COMPUTEX 2014, we’ve started seeing prototype boards in full force from companies such as ASRock (Episode #4) and MSI (Episode #3). In fact, ADATA was already showing off their DDR4 product, running on a capable board of unknown origin. But leave it to the Japanese to start selling the RAM that is built to run in them first.

AKIBA PC Hotline, has already started offering DDR4 memory for sale in Japan, under the “SanMAX” name. Pictured above is some of the first products to hit the shelves, starting at a 16GB capacity (2x8GB), and working its way up to 32GB dual channel kits (2x16GB), running at only 1.2 volts, which is one of the benefits of DDR4. SKHynix provides the actual chips for this particular line.

The currently unusable/untestable memory modules sell for $350 and $685 respectively, which should come down as all memory makers start launching their products into the pipeline. With X99 boards sporting at least 8 memory slots, you can already imagine the possibility of having 128GBs of memory in your system. Overkill, yet awesome at the same time.