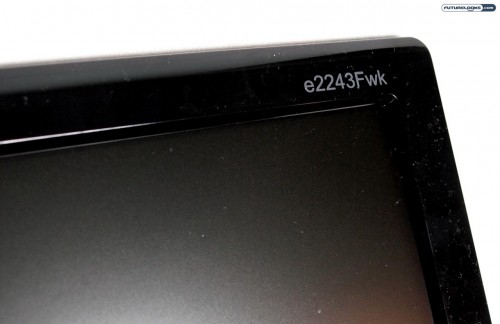 Just about everything in the world of technology is trying to be as slim and as light as possible. We’re seeing this with digital cameras, just as much as we are seeing it with smartphones. Not surprisingly, computer monitors are not at all immune to this trend either and we’re all the happier for it. AOC has embraced this trend with their new series of thin monitors.

Boasting an ultra-thin design is the AOC E2243Fwk LED backlit LCD display. AOC might not be as big a name in this arena as some of the other name brands, but does that mean that it should be ignored? Not at all! Let’s see what this slim beauty brings to the table (or home office desk, as the case may be). 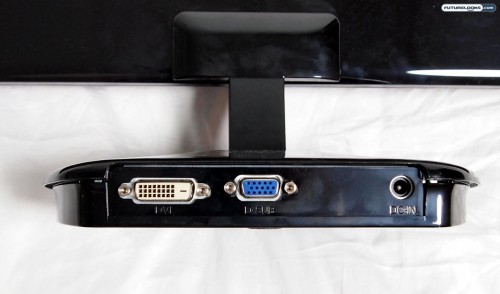 Naturally, the first thing that strikes you about the AOC e2243Fwk (as well as other monitors in this series) is its remarkably slim profile. AOC is saying that this monitor offers “minimum thickness” while still being able to provide “maximum colors.”

I wouldn’t say that it necessarily competes against the enterprise-geared NEC MultiSync EX231W, but they’re both really thin and rock the latest LED technology. Doing a quick run through on the spec sheet reveals a 21.5-inch 16:9 display, 50 million to 1 contrast ratio, WLED backlighting, low power consumption, 250 cd/m2 brightness, and 5ms response time.

Getting beyond the 1.29cm super slim profile, you find just two input options: DVI-D (with HDCP) or VGA. This should be sufficient for most applications, though I would have liked to see either DisplayPort or HDMI input (or both) on here as well. 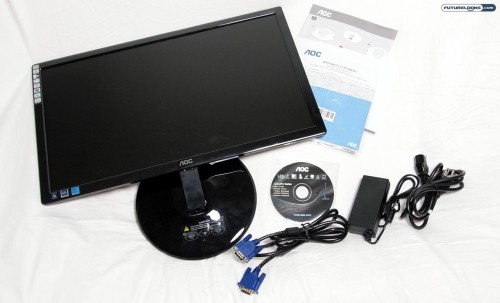 Just like other slim LCD monitors, this monitor doesn’t have an internal power supply. That means that you’ll have to deal with having a power brick, as well as the usual power cable that comes attached to said brick. That’s not a huge deal, but it is something you’ll want to keep in mind.

Beyond the display itself, the power brick, and the power cable, AOC is also including a basic VGA cable, installation CD, and some basic documentation. That’s pretty much all you need to get started, but I’d really recommend using the DVI-D connection rather than the VGA one if you want to get the best possible image quality. 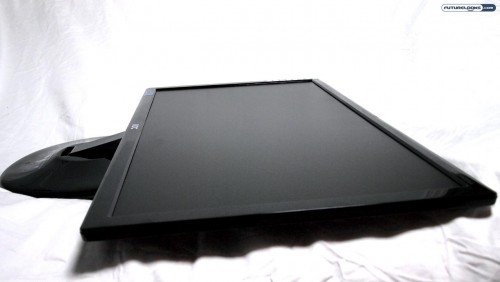 When you buy just about every other LCD monitor on the market, you’ll find that the panel and the base come as two separate parts. Some of them are easier to put together than others, but it is a necessary step if you plan on putting the LCD on a desk.

Such is not the case with the AOC e2243Fwk. The base and monitor come pre-connected right out of the box. You just have to tilt up the arm so that the screen is perpendicular to the base. There is a switch in the back for locking and unlocking the arm mechanism. That’s handy and simple.

It also presents a double-edged sword. Because of this locking mechanism, you’ll experience much less vertical adjustment on this screen as compared to some of its competitors. Most LCDs allow for a reasonable amount of tilt and that’s not present in this model.