At no time during gaming did I hear the video card over the (22 dB) CPU cooling fans. That's pretty good given that ambient temps have been a humid 25-27C as of late. Only Unigine Heaven 4.0 and 3DMark seemed to push temps up. For this reason, Unigine was looped to monitor GPU temps inside a be quiet! Silent Base 800 computer case and an open tech station. 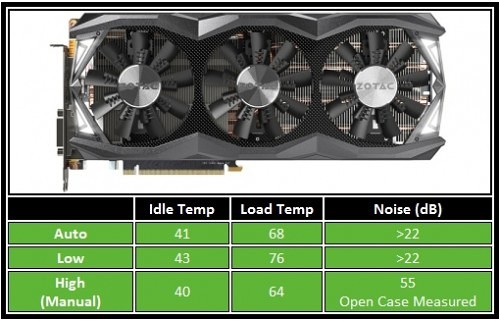 From the start, the ZOTAC GeForce GTX 980 Ti AMP! Extreme IceStorm cooler was undetectable inside the case or on the tech station. The card reached a humble 68 C at load and idled 41C at desktop. In either case, the results were almost identical. You'll want to ensure that there is great air flow in your case. The be quiet! Silent Base 800 does seem to marry both silence and cooling, which we'll be looking at in depth in an upcoming review. But keep in mind that the card will get much louder if your case has poor airflow.

To simulate the worst case scenario, the GPU fans were manually set to 100% RPM using the Firestorm utility resulting in about 41 dB (inside the Silent Base 800) to 55 dB (measured on the tech station). If your system is not properly cooled,  you will undoubtedly hear this card or any other card for that matter. 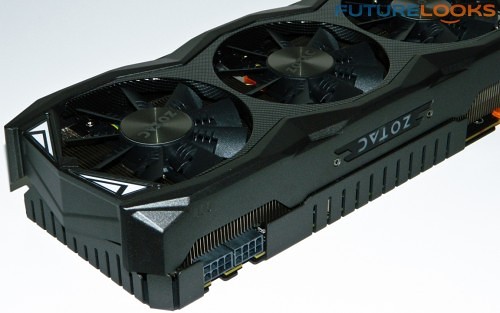 The ZOTAC GeForce GTX 980 Ti AMP! Extreme is one seriously fast and good looking graphics card. It's crazy impressive at 1080p and 1200/1440p meaning it'll handle 3D mode perfectly. Not only does it perform well, it does so without the extreme noise factor. The triple 90mm fan IceStorm GPU cooler manages temps quite well. Granted, for the very best results, maintaining higher boost frequencies and frame rates, you'll want to provide an optimally cooled environment. The card demands it.

There are a couple details to keep in mind if you want to covet this card for yourself. For starters, because AMP! Extreme has such a large high performance cooler, it requires 2.5 PCI slot spacing. The card also weighs more than many other cards. While the back plate keeps the card from bending, the PCI Express slot(s) may allow just a bit of sagging.

Unfortunately, we don't have any tangible data as to which motherboards or brands have had weak PCIe slots, and any damage is likely not covered by any warranty. Just be careful when you pack your system to the next LAN party, or put some foam inside during transport to reduce the load.

The one detail that tends to concern extreme enthusiasts is the price. Depending on how you look at it, an entry level priced GeForce GTX 980 Ti starts around $660 USD without any extra benefits or special high performance design. The ZOTAC GeForce GTX 980 Ti AMP! Extreme currently has the fastest frequencies and a great looking design for only $30-35 more. That isn't bad at all.

Do you want the same old-same old? Or, do you want to take a walk on the AMP! Extreme side? We think the choice is pretty clear.