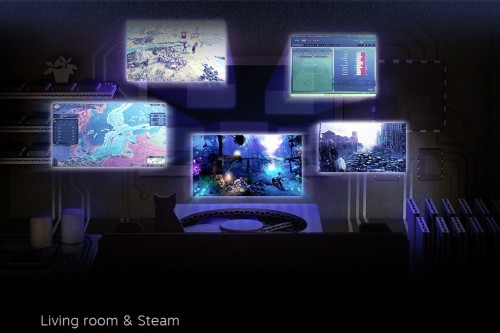 Valve final shows off the big reveal they have been teasing us with for the past few weeks. Is it the release date of Half Life 3? Are they announcing the development of Team Fortress 3? We were also hoping for more information about the Steam Family Share or the two punch response to Origin’s Great Game Guarantee announcement. Instead they announced the future release of the Valve SteamOS.

The SteamOS is going to be Valve’s attempt at an OS purely designed to do one thing very well, which is play games. To top it off, Valve’s intention is to get the SteamOS into your living room with your entire Steam library. Designed on a Linux Kernel, this entire project seems like it is directed at Microsoft Windows and the near complete monopoly it holds on PC gaming.

I can’t say this comes as a surprise with how Valve has been moving in the past few years. First a more expansive gaming experience to Mac OSX and then the support for Linux-based operating systems surely seemed to diversify the OS ecosystem away from Microsoft. Then Valve overhauls Steam to work better in a non PC environment with Big Picture Mode and controller optimization. While we think this could be very interesting if Valve can get other developers on board, we have my concerns.

Valve already has its hands full with the Origin vs. Steam fight growing in scale. We don’t think this is the time to pick a fight with someone like Microsoft even if they are very wounded by recent failures. We are just not sure what to make of this move by Valve or how it will work out. One thing is certain, this is going to be interesting so keep your eyes open.