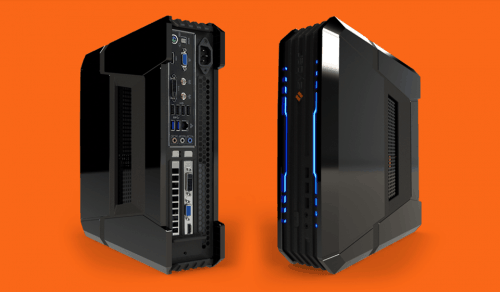 This is the year of the Steam Machine console, finding out if it will it gain any real traction in the industry. There is a lot of room for factory customization in the hardware, but will it be united with a single OS? This week SYBER, a division of CYBERPOWERPC, announced the availability of the Vapor Xtreme. It is packed with enough hardware horsepower to make your current gaming PC cry.

The Vapor Xtreme is the most powerful “console” to date with an Intel Core i7 4790K at 4 GHz and an Nvidia GeForce GTX 980 4GB GDDR5 graphics card. To ensure there are no weaknesses to be spoken of, the Vapor Xtreme also comes with 8 GB DDR3 RAM, Windows 8.1 64-bit, Steam Big Picture Mode pre-installed, and a 1 TB 7200 RPM hard drive. Xtreme was definitely the best moniker for this beast, though a blazing fast SSD would have been a nice touch.

The Vapor Xtreme console comes with a controller in the Logitech F710, which will be easy to master for the Playstation owners of the world. What will not be so easily mastered is the $1499 starting price tag. While we think they missed the mark here, don’t forget this is really a PC, so it does everything, there are tons of free to play games on Steam, and Steam Family Share to give you plenty to play. Get more details and pre-order info below.

The new GeForce GTX 980 is powered by next-generation NVIDIA Maxwell architecture, providing incredible performance and power efficiency to match all of the features that really round out the ultimate gaming experience. The new graphics card offers double the performance over previous generations, and is ready to take on heavy graphical loads like intense gaming and virtual reality. On the Vapor Xtreme, the GeForce GTX 980 enables seamless gaming at ultra-high 4K resolution, quadruple the resolution of typical Full HD (1080p) TVs.

Besides the cutting-edge hardware inside, the Vapor Xtreme is also unique among gaming consoles for its ability to be fully customized. Unlike other consoles, the Vapor Xtreme can always be upgraded as needed – whether you need more memory for multitasking and productivity, or you need a bump in graphics performance for a brand new game that might be coming out next year. Thanks to the use of standard off the shelf components, with the SYBER Vapor line of PC Gaming consoles, you will never be locked in to your hardware specifications and experience degraded performance as games become more demanding.

The Vapor Xtreme connects to your big-screen TV and features a variety of high-speed input/output ports, including USB 3.0, Gigabit Ethernet (RJ-45), 802.11ac WiFi, and DisplayPort. The console also comes equipped with a wireless gamepad for unbridled control in all of your favorite games, as well as a compact wireless keyboard and touchpad for navigation and typing in web browsers and other multimedia. The Vapor Xtreme will also boot directly into Steam’s Big Picture mode and is ready for Valve’s SteamOS upon availability.

The SYBER Vapor Extreme starts at $1499 and is configured by default with the following:

The SYBER Vapor Xtreme can be modified through CYBERPOWERPC’s VenomX custom configuration service. Through VenomX, customers can configure specialized systems and take advantage a several great benefits, including expedited order processing and shipping, enhanced packaging, and an extended warranty.

The Vapor with new GeForce GTX 980 or 970 cards can be built to order using CYBERPOWERPC’s VenomX Custom Configuration Service online at http://www.cyberpowerpc.com/landingpages/VenomX/SYBER. The console can also be pre-ordered in carefully chosen configurations at a these select etail outlets: Newegg.com, Amazon.com, and TigerDirect.com.