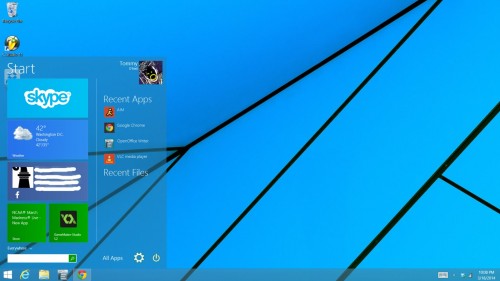 It’s no secret that Windows 8 is the OS no one wants to like. It’s like an odd numbered Star Trek movie; the vast majority don’t want it, save for a few die hards. Well, Microsoft may be taking this opinion to heart with some of their latest moves regarding the maligned OS. Originally we were supposed to receive a major update to Windows 8.1 this week, then that update was scaled back to some minor code additions. With that announcement, Microsoft has put off any major updates for Windows 8 until at least the release of Windows 9, opting rather for a monthly update schedule.

As for Windows 9, there are rumours of a beta being released late this year, with an RTM version in the first half of 2015. That adds to the already huge rumour pile regarding the new OS and its features.

So far, we’ve heard that Windows 9 will remove the Charms bar, return the Start Menu, and make Metro apps show up like normal windowed apps on the desktop. So Microsoft isn’t backing down from the “store” mentality, and they certainly aren’t abandoning mobile (good, cause Windows 8 is actually a competent mobile OS), and Live Tiles aren’t going anywhere. They just seem to be finally doing what we’ve been asking from the start; split the mobile and desktop OS paths into SKUs that make sense for each platform.