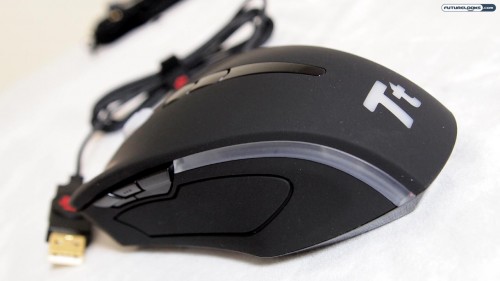 Flipping over to the other half of the equation, we find the Black Element Gaming Mouse, also from Tt eSports. I wouldn’t say that this necessarily accompanies the Challenger Ultimate, but they certainly share much of the same DNA, including the illuminated Tt logo in the front.

There’s also significant lighting here, but you don’t get the same 256 color customization as the keyboard. Instead, you’re stuck choosing from just five different colors, though you can turn the light on and off for the scroll wheel and light pipes separately.

The Black Element is marketed toward MMORPG and RTS gamers, but I don’t see why a FPS enthusiast couldn’t use it too. The mouse has fundamentally an ambidextrous design, but the placement of the extra buttons lends itself to righties. The gold-plated USB connectors are an added bonus. It retails for about $64.99 US. 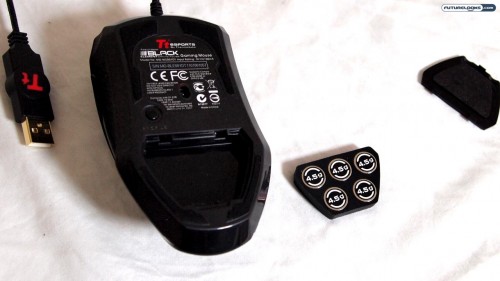 When you get to a certain level of competitive gaming, you want a higher level of customization. That’s what Thermaltake is offering here, since you can add and remove weights from the base to suit your preferences. They almost look like batteries, really.

Below the scroll wheel are two additional buttons. These allow you to quickly switch between four levels of DPI settings on this laser mouse, ranging from 800 to 6500 DPI. That can come in really handy, since you can do that on the fly without having to muddle through an additional interface. 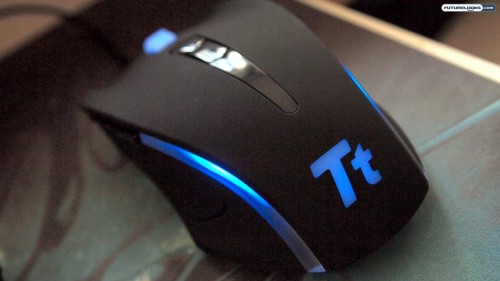 The rubber coating makes for a softer, more comfortable finish, and the molded design accepts your hand quite readily for extended gaming sessions. I would have preferred if the three extra buttons on the left were a little more toward the rear than the front, but that’s a minor quibble.

Again, I used Team Fortress 2 as my benchmark game and I found the mouse to be both comfortable and responsive. Being able to change the DPI settings on the fly was handy for when I switched between running around and settling down for a sniper shot. Movement was smooth, though it worked best on a proper mousing surface, rather than a bare table.

The real downside comes on the software side, just like the keyboard. The user interface looks all jazzed up, but it’s not particularly functional. For instance, there are several icons in the interface where it’s not exactly clear what they do. Like the Challenger Ultimate, the Black Element also allows for five profile settings. 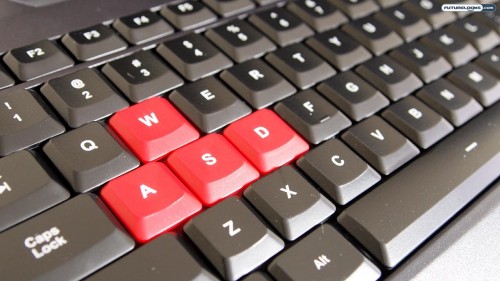 Thermaltake has done a wonderful job with offering a distinctive aesthetic to go with its Tt eSports line of products. The build quality is great, performance is commendable, and discomfort during extended use was never a concern. The two items really do seem to go together. There was no doubt that a proper gaming mouse and keyboard like this improved my gaming performance.

My main recommendation would be an improvement in the bundled software for customizing this gaming equipment. The hardware is there; it just needs the software to provide for a better user experience. With some help in that department, Tt eSports can rank right up there with the Razers of the world. There really is no excuse for the software not to match the hardware theses days. But if you can get over the software quirks, or tend to go commando and not use any software at all, then we highly recommend the Thermaltake Challenger and Black Element combo for your next gaming interface upgrade.

The Challenger Ultimate and Black Element list for $99.99 US and $64.99 US, respectively at many retailers and etailers that stock Thermaltake products.