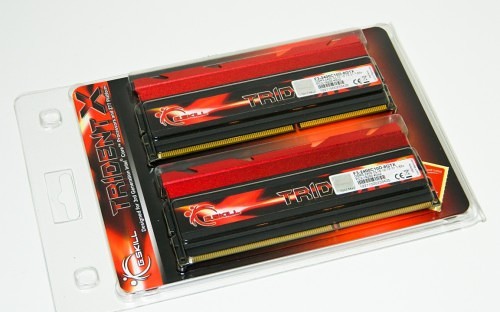 It’s been a while since I put a few elite overclocking DDR3 memory kits to work on any these pimped out Intel Sandy Bridge and Ivy Bridge test systems. While overclocking the memory itself won’t give you any gains, overclocking the CPU at the same time is what allows you to use that bandwidth. You have to do both and that’s when a memory kit like the G.SKILL TridentXX 2400MHz DDR3 8GB dual channel memory kit comes in handy, offering you the best IC modules which also allow for tighter memory timings, if you choose to downclock them, for better system response. Let’s see how tight and fast we can get these modules to run today. 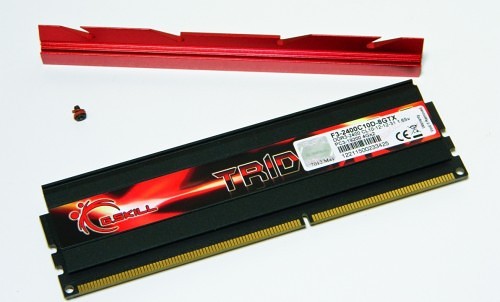 The G.SKILL TridentX kit features a removable crimson red heatsink extension on top of a black spreader, sporting  matching G.SKILL branded stickers. The red tops are actually pretty simple in detail but contrast really well with the black spreaders. Removing an end screw allows users to slide off the red cap to shorten them up a bit more in case your CPU fan needs the space or maybe you just like jet black and no red. Too bad the G.SKILL emblem and name aren’t etched in to the heat sinks. That would look pretty sick and original.

As for specs, it’s pretty standard for most Z68 and Z77 motherboards to support DDR3-2400 with minimal issue. The programmed XMP profile should default to 10-12-12-31 timings using only 1.65 volts assuming your motherboard’s BIOS is up to the task. You can see that these are all “tested” specs meaning G.SKILL can guarantee this operational performance. However, it’s not uncommon to see their high end modules like these achieve even better results with little to no voltage increase. In other words, the timings might be able to hit 9-10-10-31 or so. We’ll find out if this $99 US/CA kit can do more in testing.

Those who need more than 2400MHz will find the TridentX series tops out at 2600MHz in 8GB, 16GB (dual and quad channel) and 24GB (triple channel) kits. In all reality, this is the maximum sweet spot since very few motherboards are capable of supporting that frequency and only a couple capable of even more. Yes, we’re on the hairy edge of CPU melting these days. 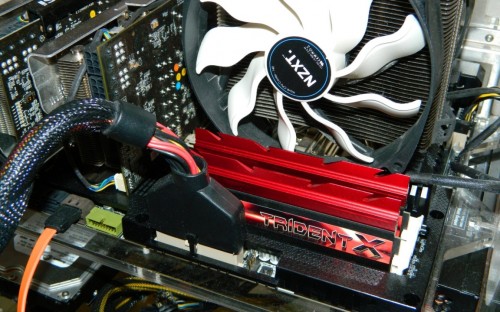 Since, few boards can truly support 2600MHz XMP profiles, I’ve selected one capable of an impressive 2800MHz. I’m curious if the memory runs XMP tested specs as well as CAS9 timings or higher frequencies. Again, your motherboard’s BIOS will absolutely vary and probably require some fine tuning if the XMP profile doesn’t hold.

The motherboard’s BIOS was left to optimal settings which naturally enables Intel Turbo 2.0 which scales to 3.9GHz. Both XMP profiles and manual memory settings were used to compare stock Intel supported memory frequencies (1600) to overclocked frequencies. 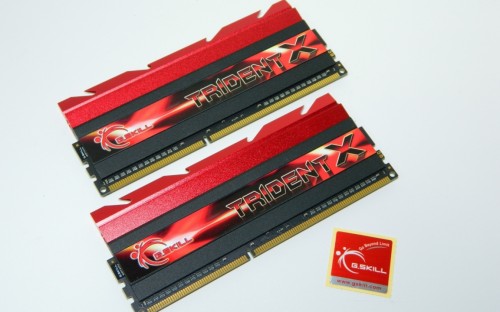 In the simplest of terms, overclocking just the memory basically just overclocks the Intel Ivy Bridge processor’s integrated memory controller (IMC) and not the cores. Since the CPU cores do the bulk of the work, they influence system performance the most. Think about it like it’s a car. The engine (CPU) only puts out a certain number of horse power. You can give it the sweetest racing tires on the planet but the horse power isn’t going to go up. However, if you upgrade the engine, those racing tires (memory) will support that extra horsepower and get you around the track quicker.

Since overclocking memory tends to be the prettiest and uses the best IC modules around, I often use it inside demo systems to show the motherboard’s capabilities and in my personal systems, but downclocked and with lower, but tighter, CAS Latency (CL) timings to improve system responsiveness. The G.SKILL TridentX 2400MHz work perfectly at 1600MHz 7-8-8-24 (CAS7) and are faster than 1600MHz 9-9-9-27 (CAS9) memory because of those lower timings. Unfortunately, I was unable to get the memory to run 1600MHz CL6 timings most likely due to the limitations of the Ivy Bridge IMC.

Big programs can be written and read to RAM very quickly. The more RAM you have, the easier it is for the system to find a place for it all. The memory module frequencies and timings on each of the TridentX’s sticks reach speeds of 2400MHz. To see what kind of bandwidth the processor’s integrated memory controller can pull from the TridentX, I’m using SANDRA’s memory bandwidth benchmark. 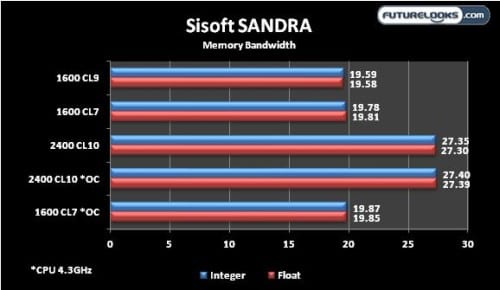 First, you can see the benefit of lower CL7 timings over CL9. This is one benefit of running TridentX at the slower frequency with better timings. Note the 1600-CL7 performance when the CPU is overclocked. However, if your processor needs more speed for massive files, the 2400MHz bandwidth is about 8GB per second faster!