Side Panels and Back 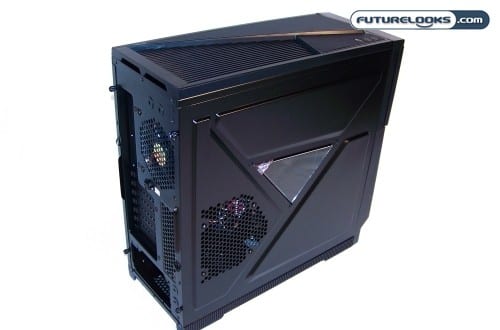 Moving to the right side, we’re greeted by four more abstract panel angles and a single small side plexiglass window. The side panel also provides extra needed venting via a vent hole located near the back of the panel. It can accommodate an optional 120mm side panel fan. We think a fan should be included by default given that so many gaming video cards get so hot and this is a gaming chassis after all.

Another thought we had is that gamers like to see more of their system. The little window seems more like it’s teasing the onlooker than actually offering a view. Perhaps a future panel revision would include turning the angles in to windows themselves. It could still provide venting as well as a better view. That would be a win! 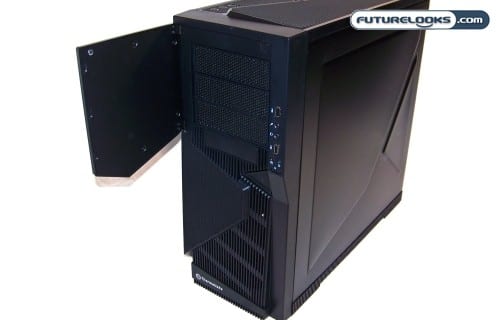 The left side is pretty uneventful though abstract. There’s really no extra room for cable management with a large and more accommodating bulge. This would assist in hiding extra cables behind the motherboard tray. With a little extra panel depth, it could be possible to tuck a few smaller cables behind. While it could be a great addition it isn’t always a useful feature unless you have a lot of PSU cables to tidy from a non modular power supply. Most gamers and enthusiasts like modular power supplies anyways.

Inside the Armor Plated Chassis 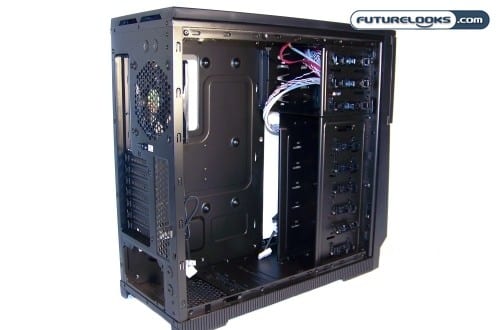 The Armor A90 sports an all black chassis inside and out. Gamers love this particular feature as it tends to pimp your system out more. Here, we get a glimpse at the two chassis holes for running water cooling tubing and the handy little theft feature which is simply a machined cutout with a cover that secures the cables from your peripherals, preventing any kind of quick removal of your mice, keyboard, or headset. Some security is better no security, right?

Along with the sexy black polished interior, the Armor A90 features three tooless 5.25″ and six 3.5″ drive bays. The largest majority of users shouldn’t need more than this. And, if you do, perhaps it’s time to consider an external hard drive or maybe a network attached storage system to back up some of those episodes of Top Gear. 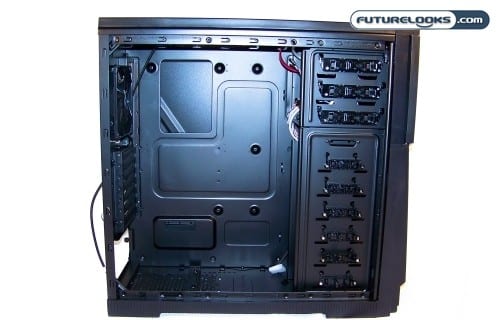 Thermaltake includes three cooling fans. The front 120mm blue LED fan can does a good job of pulling air in at the lowest point of the chassis. You’ll have to pull the bezel off if you want to mess with the front fan. The top 120mm blue LED and rear 120mm cooling fans are much easier to service.

That’s about it for the chassis. Let’s see how well the case handles a noisy stock retail CPU cooler and a legendary HOT nVidia 8800 Ultra!

Most any computer case will properly house your computer system, but may not prove to be an ideal or efficient case in terms of cooling. For these reason, some rather hot and noisy components were used to create a brand new long term case testing solution which should give any case a run for its money.

These components are as follows…

Our operating system of choice for all testing is of course Windows 7 Ultimate 64 bit. For temperature testing, we’ve introduced an external fan controller with its own temperature probes stuck to the hard drive, CPU northbridge chipset and of course the hot GPU. The device we’re using is the Zalman ZM-MFC2 Fan Controller. Let’s install some components and get into testing.