Running Through Features and Utilities 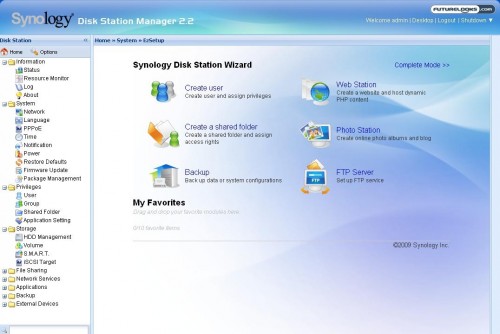 Going to the “Management” section of the Disk Station Manager 2.2 sends you to the page shown here. The main window walks you through anything you want to configure or activate, whereas the treed drop-down menu to the left shows you what is available. For instance, you can activate the Download Manager to allow for direct BitTorrent downloads. This function is much like the one in the Patriot Box Office, but with a better interface. Tell it the location (either local or online) of the torrent and it’ll take care of the rest.

Doing so much more than acting as a “simple” network attached storage device, the Synology software includes iTunes server support, automated data backup solutions, Surveillance Station 3 (supports up to 5 IP cameras), and more. As mentioned, it does work perfectly with Apple’s Time Machine Backup, which was confirmed by one of the other staff members with his MacBook Pro. Essentially, the DS210j will act like an Time Capsule and all you need to do is select it as the backup device. Simple.

For power consumption, I connected the Synology DS210j to a standard wattage meter. During the bootup process, the NAS consumed an average of 37 watts. During regular operation, including when files were being written to the hard drives contained within, consumption hovered in the 19 to 22 watt range. That’s quite low. 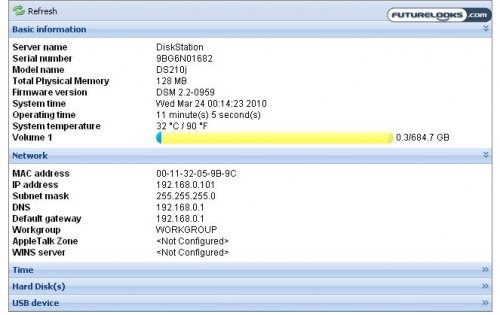 To test the actual performance of the NAS enclosure, I used the Intel NAS Performance Toolkit. Tests were performed with both the NAS and my notebook hardwired into my D-Link router.

For copying a large file to the NAS, the toolkit yielded an average throughput of 9.617MB/sec. Copying a large file from the NAS had a similar speed of 9.657MB/sec. When copying a directory with small files to the NAS, the recorded average throughput was 5.840MB/sec. Copying the directory from the NAS was slightly faster at 6.809MB/sec. None of these speeds were particularly impressive.

When attempting a less scientific approach over an 802.11g Wi-Fi network, the speeds were understandably even lower. A larger file (350MB) being copied to the NAS averaged 0.986MB/sec and the same being copied from the NAS averaged 0.824MB/sec. When transferring a directory of MP3 files (109MB total) to the NAS, the throughput was 0.924MB/sec. Copying from the NAS was clocked in at 0.858MB/sec.

It is well within the norm to spend $400 or more for a suitable network attached storage device, drives not included. The Synology DS210j is available for just $230US, also without drives. That makes it one of the more affordable NAS enclosures on the market today, especially if you factor in the polished user interface and all the cool apps and functionality that the more expensive Synology devices also offer.

In terms of performance, the DS210j leaves something to be desired. Performance is middling at best, but the impressive utility and attractive GUI certainly win a few points in my books. It’s similar to the line that Apple takes with many of their products. They may not be the most high performance, but they are easy to use and pretty.

For the average consumer who wants an easy to use NAS with impressive functionality, Synology has them covered with this device. If you’re a Mac user, the Time Machine backup compatibility is a downright bargain considering that Apple charges $299US for a 1TB Time Capsule that does nothing else.